Merrily Ann (our Raggedy Ann style dolly) has been unwell this week. She and several others (myself included) have succumbed to a nasty cold virus that is proving very difficult to shake off. Luckily 'snufflers' have had cosy beds in which to suffer in comfort with plenty of fruit juice and tissues close-by. 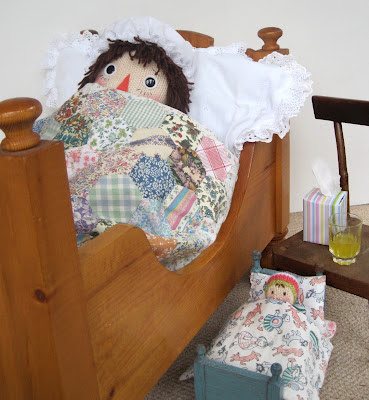 Playroom patients have had plenty of help on hand and games of 'pass-the-tissue' have proved extremely popular. This is the dolls' version of an Olympic relay race, minus the baton of course. 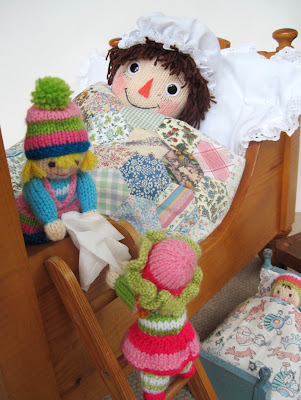 Needless to say, tissues have been in constant demand
and so have been much more useful than a baton. 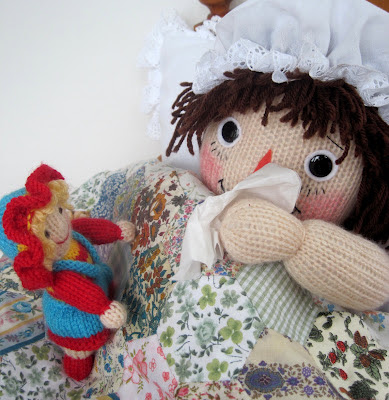 Last week you saw Merrily Ann's large wooden bed being used to ferry everyone back from the garden to the playroom (many thanks for your comments by the way). It's a very sturdy little bed that has been in the playroom since my kids were young and the dolls never miss a chance to climb into it at the first available opportunity. This week it has been the turn of the hard worked 'tissue relay team' who have loved snuggling down under the quilt to keep Merrily Ann company. 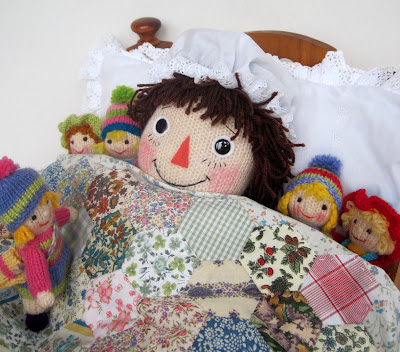 Annoyingly our snuffles have coincided with some of the best weather we've had all summer but the enthusiasm to go outside and have fun has been absent.
I've spent much of my time looking through books and came across this picture of Edwardian families enjoying a holiday beside the sea. 100 years ago people wore smart clothes for a day on the beach and a hat for protection from the sun (a sun tan was considered very undesirable). If you wanted to take a dip in the sea you would have hired a 'bathing machine' (a little wooden caravan on wheels). Inside you would have put on your 'cover all parts' bathing costume then the machine would have been pushed into the water and you would have descended the steps to take your 'dip' with etiquette and modesty. How times have changed! 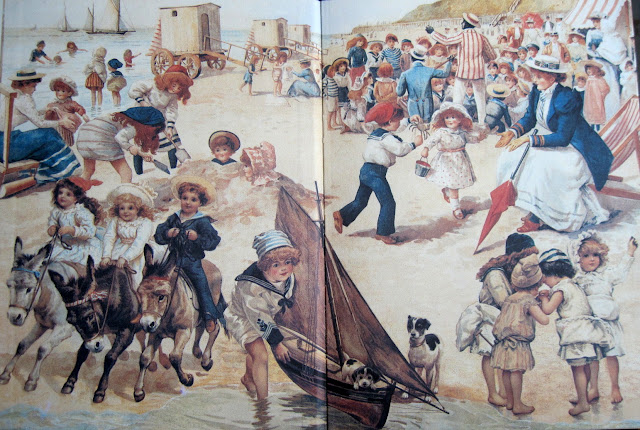 Many people would have travelled to the coast by train but wealthy families might have owned one of the early motor cars and journeyed in a new and exciting way. This picture makes you realise how fraught with danger early car rides would have been. Travel times were slow and after the first few miles children must have been restless and bored. Just look at that rascal in the front next to the driver. He seems to be holding a whip which I expect he is using to make the car go faster! I wonder how many travelling dolls and teddy bears fell out during these lengthy journeys? 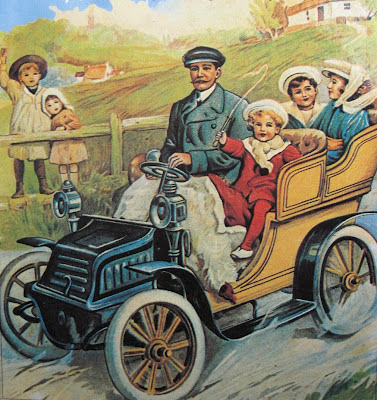 How different our 21st century car travel is.  Children are secured safely in the back and their toys can join them and be confident that they will return home safely with their young owners.
An advertisement for the Seat Altea car (shown on Britsh TV a couple of years ago) is one my all time favourite ads. I wonder if it was shown in other countries around the world. It reminds me of my kids when they were young as they always insisted on taking dozens of toys on any trip. The advert starts with a teddy bear packing his loose arm into a suitcase then everyone leaves the playroom and heads for the car. To view the advert click on the link below. I hope it makes you smile . . . .