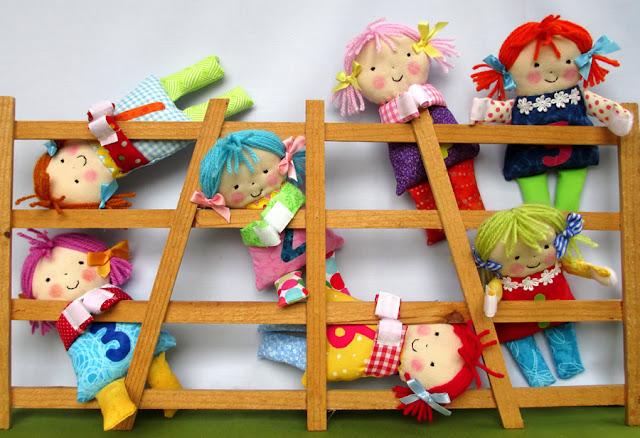 Another came to climb with them
So climbing dolls were eight

I've recently been having enormous fun making these little rascals and writing their pattern for my Etsy shop. I was originally only going to make two or three but the family quickly grew. They are such amusing little characters that I was unable to get off the dolly-go-round and eventually came to halt when I'd completed ten. 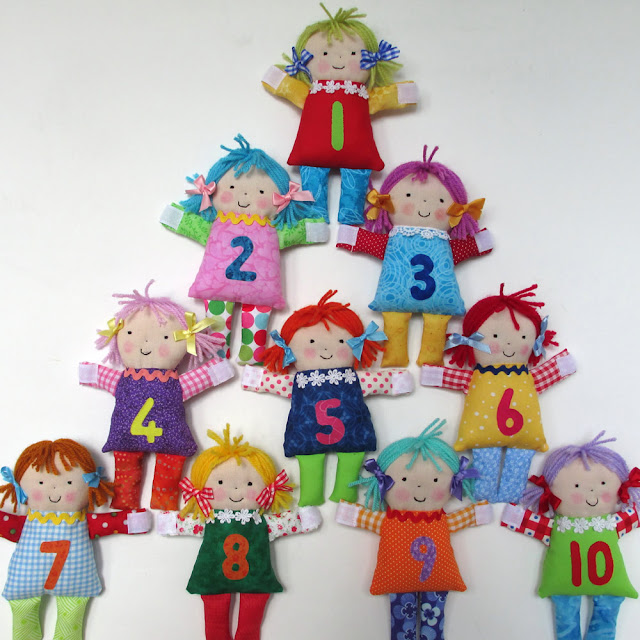 I've called them 'Little Counting Dolls' and each dolly is numbered so I'm hoping they could become fun learning toys for young children.

There is Velcro (hook and loop) tape on the hands which enables them to link together and create cute dolly bunting.

One little rascal decided she'd stick herself to a birthday card.

As the dolly making continued I found I had a little verse popping into my head and I knew I'd have to illustrate it. It starts with . . . . .

One lonely counting doll
Wondered what to do 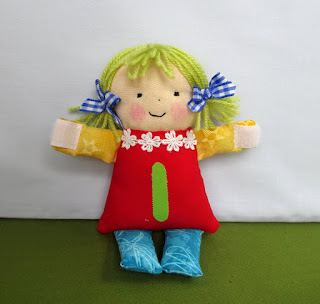 There are sailing dolls 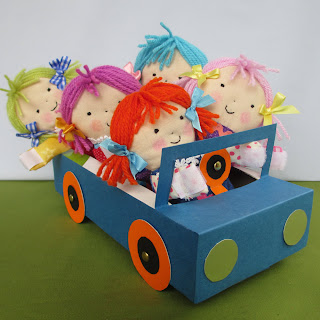 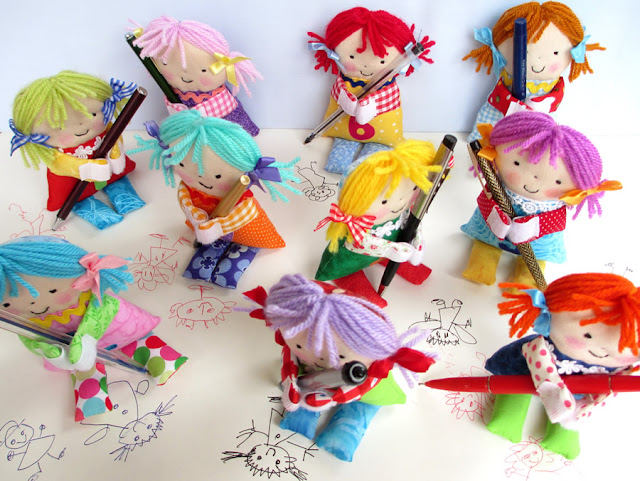 Don't you just love those dolly doodlers! I'm rather sorry to have completed this little project as it's given me enormous fun. If you'd like to have a smiley time making these little dolls for youngsters you will find the pattern for the 'Little Counting Dolls' in my Etsy Flutterby Stitch shop. And guess what . . . . The pattern also includes the little verse which is fully illustrated.

I hope you are all having an enjoyable weekend

Labels: Dolls, Sewing and Other Crafts

A number of nice people have recently asked if I ever list sewing patterns alongside my knitting patterns. So far I haven't, but this week I decided to create some cuddly bunnies and the sewing pattern for them is now in my Flutterby Stitch shop as an instant PDF download. 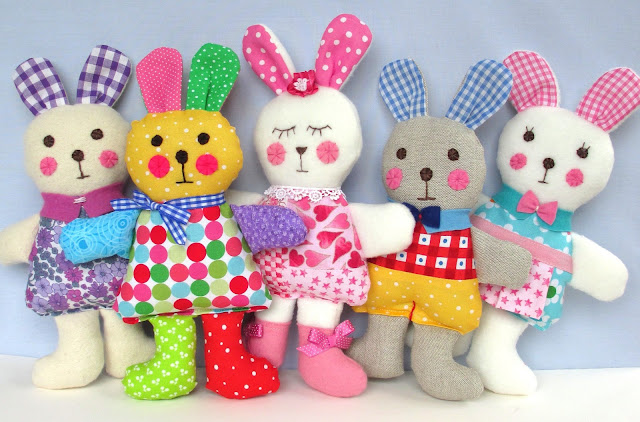 These colourful little rascals are all made from the same pattern and they are great for using up all those fabric odds and ends we all hoard. They make ideal soft toys for very young children and wouldn't mind the occasional wash if too many kisses and cuddles have made them a bit scruffy.

VIOLET is the little girl on the far left and is made from soft flannel and printed cotton.
RAINBOW is made from multi coloured cotton and could help young children with colour recognition.
LOVELY ROSE stands proudly in the middle. For the millions of little girls who want everything to be pink I had to make a perfectly pink rabbit and she's very proud of her pinkness as you can see.
LINDEN is a cute little fellow made from natural linen and printed cotton. I hope he will appeal to little boys.
PETAL is the little girl on the far right and it looks like she will be the one keeping house for the other four.

I hope you are all enjoying your weekend.
Until next time x
Labels: Bunnies, Sewing and Other Crafts

Just popping in to say a big thank you for the nice comments you left last time and also for visiting my new Etsy shop. My shop shelves were a little empty by yesterday morning so I've been busy again. 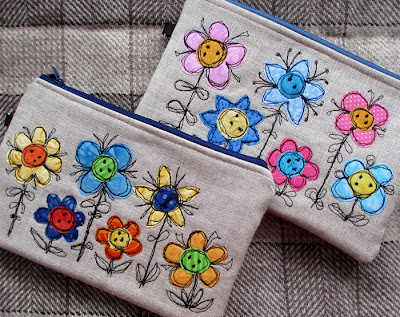 Here are two more pencil cases with applique and a profusion of freestyle machine embroidery. These designs were great fun to create. I'm a constant doodler with pencil and paper and this type of embroidery is very like doodling with stitches which is why I love it.

My 'work-space' is littered with doodles like the ones below. Little dollies with happy smiling faces are scattered on all available surfaces. Yesterday I looked through  hundreds of pages of 'scribble' and reintroduced myself to some of the little characters that had popped off my pencil over the years. When I came across this little cutie I knew she'd be just right for one of my freestyle garden scenes. 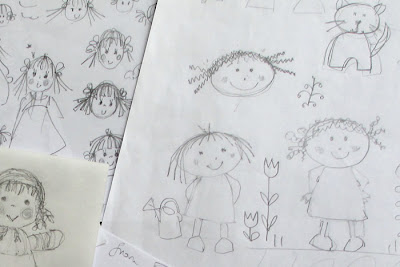 Most sensible people would plan what they were going to do before they started stitching but I tend to launch myself into a project and wait for something to appear. The stitched outline came first of course. Next I had to choose the fabric for the little wristlet bag I planned to make. My Moda jelly roll 'Tropicana Batik'  contains sumptuous colours which I knew would be perfect  for the flowers and butterflies. So out came the dyes and paints and the little scene was tinted in colours to match the fabric. 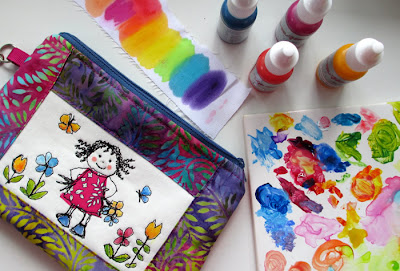 When fully dry it was time to make the bag. The jewel-like shades of the batik combine really well together and are always a joy to use.

This is the back of the bag. 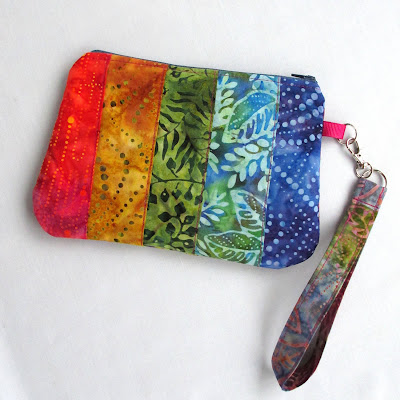 So now with a little more stock in my Flutterby Stitch shop I have some clearing up to do before I begin another project. I have a few ideas but I'd better leave that until next time.

As always, thank you for popping in.