Greetings friends. What an unproductive autumn it has been here at Flutterby Patch. Back in mid September I started writing a new knitting pattern and planned to complete it as quickly as possible so that knitters could create some 'cuties' for Christmas. But then disaster struck. I foolishly slipped on a concrete step and fractured my wrist. Ouch!! I returned from hospital with my wrist in a large splint and I've been sitting around waiting for it to heal. I'm right-handed and, of course, that was the side where the damage occurred. Needless to say I've been unable to knit for several weeks and only used the computer when absolutely necessary as typing and doing everything with my left hand was a nightmare.
But here I am nine weeks later; almost back to full speed with just a few residual aches and pains. Yesterday I managed to finish the pattern and have even produced a second to compliment it. See what you think. You'll find find both new patterns in my Etsy shop. 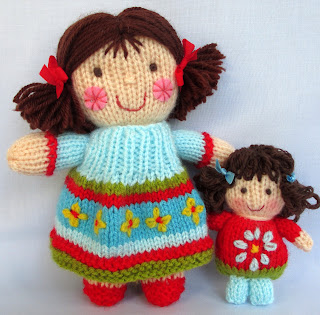 The dolls living in the playroom were delighted to greet Jenny and her tiny sister who we immediately named 'Jolly Cute' because that is what she is.
It wasn't long before Jolly Cute's friends started to appear and Jenny now has the job of looking after them all. 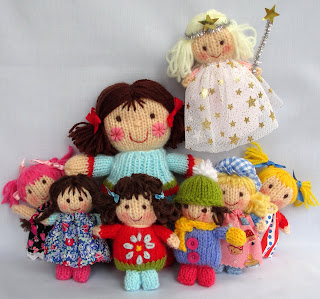 All the tiny dolls have Jolly names. From the left they are Jolly Pink, Jolly Flowery, Jolly Cute, Jolly Cold, Jolly Sweet and Jolly Dotty. The fairy is Jolly Magic.
As the little dolls needed somewhere warm and cosy to live I knitted three small bags and put Jolly Dolly faces on the front of each 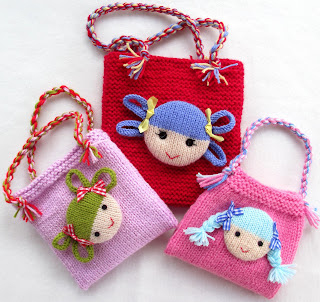 As you can see the tiny dollies fitted perfectly and I'm guessing little girls everywhere would love to receive a bag containing some jolly friends for Christmas. 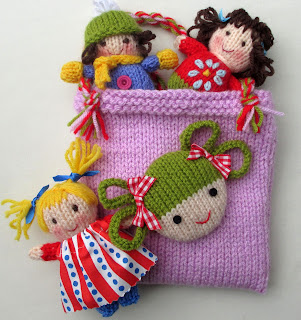 You'll find the two new patterns in my Etsy shop. 'Jenny and the Jolly Dollies' pattern has knitting instructions for Jenny and the seven tiny dolls and  'Jolly Dolly Bags' contains the pattern for all three bags with dolly faces. You can save $2 by purchasing both patterns together in my special '2 Pattern Deal'. UK buyers might want to visit my UK shop where all my patterns are listed in GB pounds sterling. 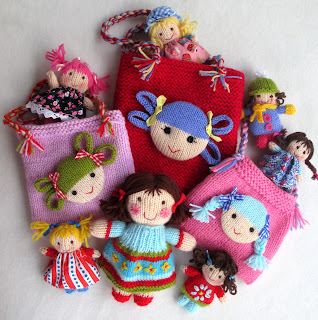 I knew everyone would be expecting a new pattern or two before Christmas so I really hope I'm not too late and you have fun using them. As I've been out of action for so long I now have lots of jobs to catch up on around the house.
Labels: At home, Christmas, Dolls, knitting
Newer Posts Older Posts Home
Subscribe to: Posts (Atom)