Isn't it strange how one person's trash can be another person's treasure. Many years ago I was horrified to find a friend discarding a bundle of gorgeous damask fabric samples. They dated from the 1960s and she couldn't find a use for them. Needless to say I volunteered to take them off her hands. 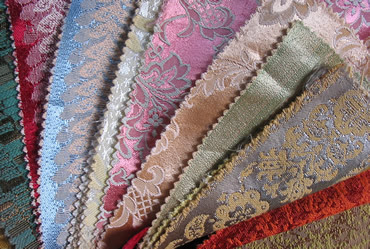 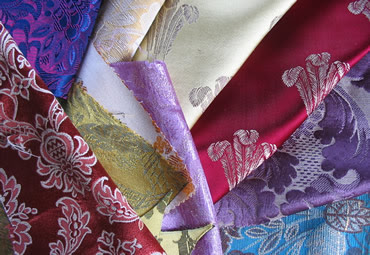 Over the years I've found many uses for the fabrics 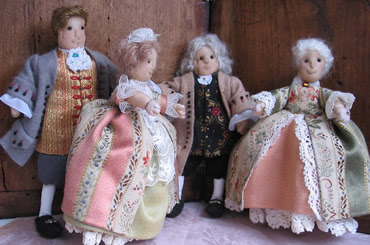 The smaller patterns were ideal for the dresses and waistcoats I made for my 18th century dolls house family and I have other pieces put by for the four poster beds. The samples aren't large so I always cut into the fabric with caution and save small left-over scraps just in case I find a use for them at a later date. That 'later date' arrived during the week when I used some of the scraps to cover 9cm polystyrene balls to make Christmas baubles. 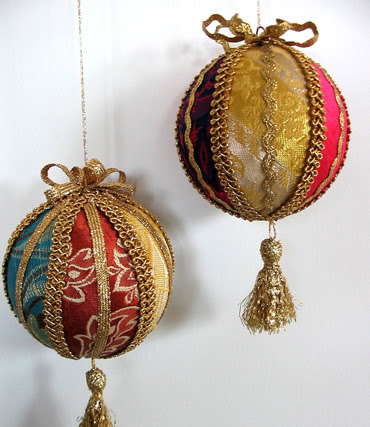 Recently several talented bloggers have posted pics of their bauble handiwork and I've been itching to give it a go. The small off-cuts of damask were just right for the job and I was pleased with the results. I have a selection of gold metallic braid left over from other projects and this came in handy for covering the joins between the different fabrics. I'd planned to use beads and buttons as finishing touches but they didn't look right so I attached tiny brass bells (with pins) around the centre of the plainest bauble. I'd like to say the bells tinkle beautifully when jiggled but I'm afraid the sound they make is more of a dull rattle. 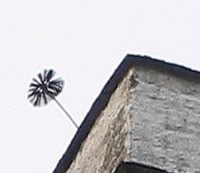 Whilst I happily created festive baubles my husband was hard at work doing a more important job, sweeping the chimney. Our sitting room chimney is a law unto itself and has twice caught fire only a few weeks after it has been swept, so hubby likes to keep it spotless. The second time a fire caught hold the chimney pot exploded and the sharp fragments landed on the car roof (we still have the dents to prove it!) 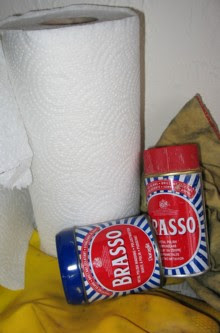 With so much 'useful' activity going on in other parts of the house I decided I should also be seen to be doing something more essential. Now this is a job I always put off doing because I don't enjoy it...cleaning brass. Throughout the year I convince myself that tarnished brass doesn't look out of place with our 'older style' furniture but I do like clean shiny brass at Christmastime, so this week out came the cleaner and the rubber gloves. 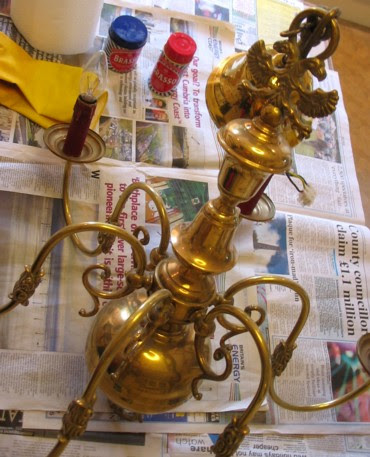 No sooner had I laid newspaper on the kitchen table than my husband arrived and plonked our dining room chandelier onto it. He must have thought this would be a good opportunity to disconnect it from the electricity supply and bring it to me for a clean but its arrival on the table quickly made my apathy for brass cleaning a whole lot worse. 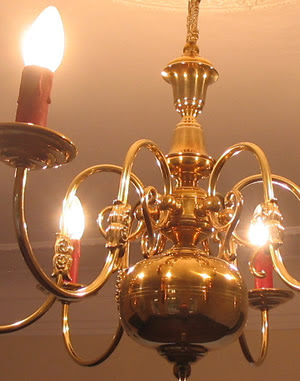 I persevered and confess it didn't take long to get it shining again and within an hour it was reconnected and fully working. I think you'll agree it was worth the effort! 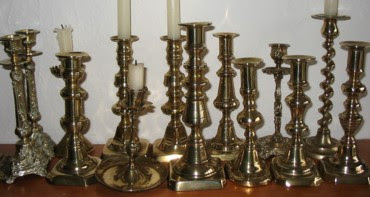 Then out came the candlesticks. I just love mellow candlelight at Christmas. A few years ago I spotted a picture in a magazine of an old oak dresser decorated with Christmas greenery and a large collection of mismatching candles. It looked wonderful. I knew I had to recreate that 'look' so I trawled through Ebay and before long I found the perfect lot. One dozen vintage brass candlesticks, all different shapes and sizes (no pairs). A pair of candlesticks can fetch a decent price but mismatched ones aren't always popular and as a result I got a bargain buy. Cleaning them was a lot easier than tackling the chandelier and I'm really looking forward to basking in the glow of warm candlelight over Christmas. 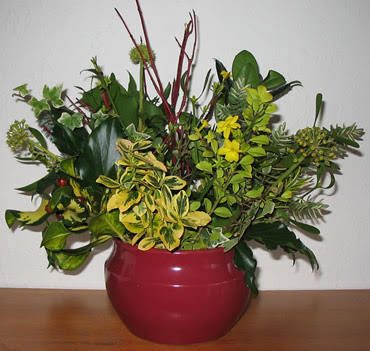 Holly, ivy and mistletoe have been brought indoors during December since Pagan times as a way of brightening homes during the dark days of winter. According to Robert Herrick (an Elizabethan poet who lived 400 years ago) the tradition was to keep the Christmas evergreens in the house until Candlemas (2nd February) when they should be replaced by Box which should stay indoors until Easter. I love these old traditions!


Ceremonies for Candlemasse Eve (with original spelling)
by Robert Herrick (1591 - 1674)
Down with the Rosemary and Bayes,
Down with Mistletoe;
Instead of Holly, now up-raise
The greener Box (for show.)
The Holly hitherto did sway;
Let Box now domineere;
Untill the dancing Easter-day,
Or Easters Eve appeare.

It is the start of Advent on Sunday (30th Nov) and I will be bringing more evergreens into the house. I wonder if they will survive until Candlemas. In Elizabethan England there was no central heating so my guess is they will have dried and withered by New Year. I will let you know.
Labels: At home, Christmas, Sewing and Other Crafts
Newer Posts Older Posts Home
Subscribe to: Posts (Atom)