Greetings friends. I've been absent from blogland for quite a few months and I know some of you have wondered where I'd disappeared to. I'm afraid I can't tell you I've been on a luxury cruise or lazing on a tropical beach somewhere. In fact I spent the autumn months at home without a kitchen! I'll tell you the story . . . . . . 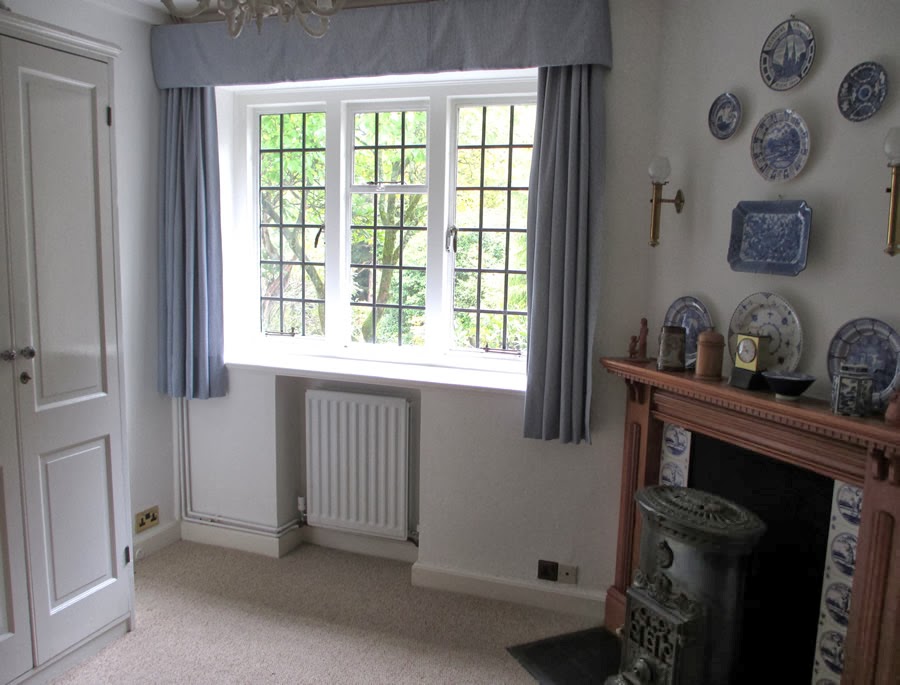 Until October I had a pretty breakfast room next to the kitchen. It had a window with blue curtains that matched my blue and white china. In the corner was a fireplace with wood burning stove and my china decorated the wall above. A small cosy room, we used it a lot when the children were young but they've flown the nest now and the breakfast room was used very little. And so we decided to make changes . . . . . . . 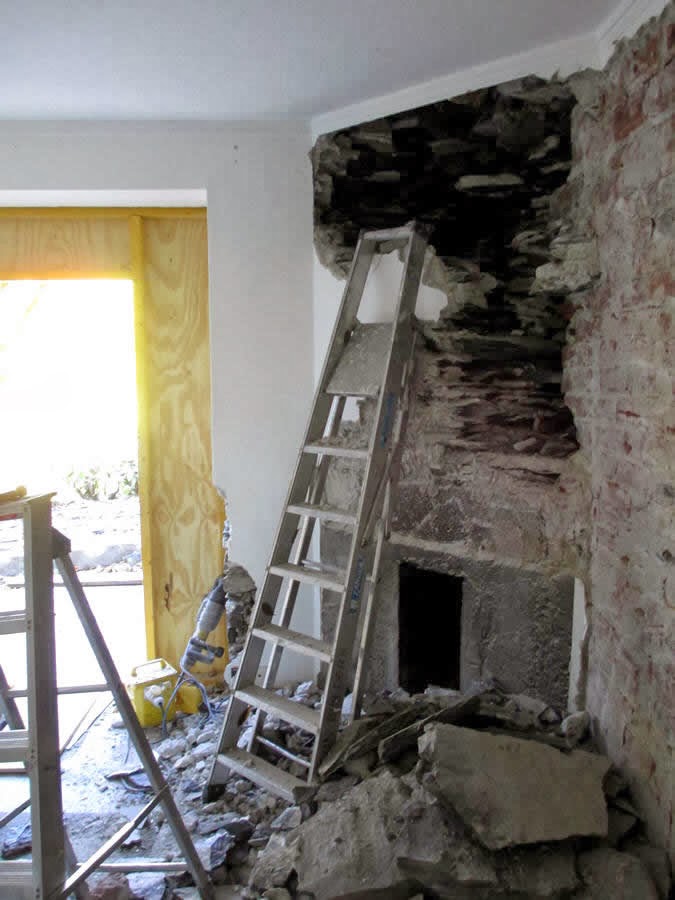 In October the builders arrived. They took out the window and knocked out the wall below to create an opening for a door. Next they removed the pretty fireplace. I was sad to see it go but it filled the entire corner of the room and I knew I'd need that space for my large china cupboard.

Everything in the kitchen was removed into the dining room and cloakroom and these two rooms became our temporary kitchen while work was in progress.

You can see the dividing wall between the two rooms just behind the stove. This wall had to be removed in order to link them together. 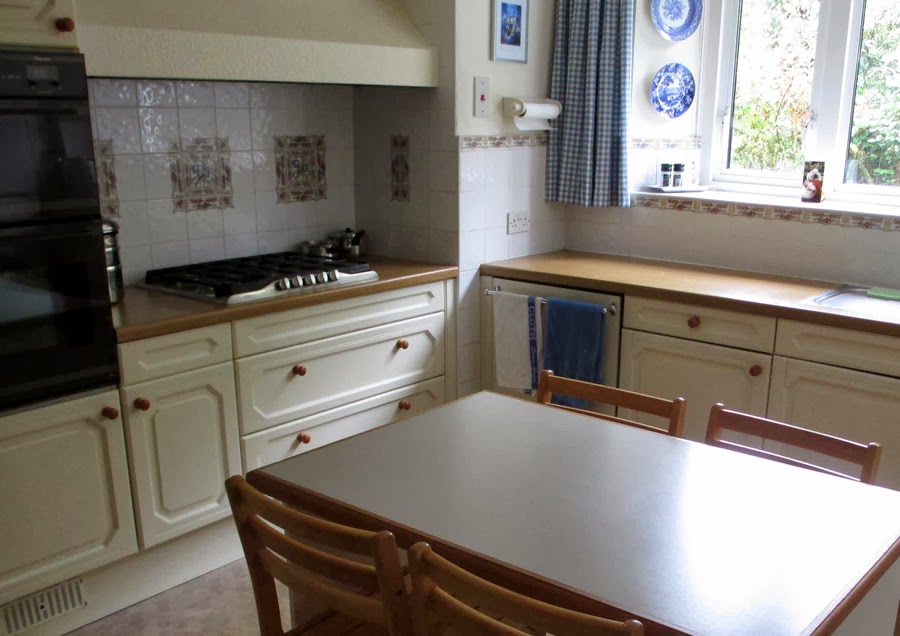 Sadly the pretty floral tiles couldn't be saved and quickly got broken up by the builders. 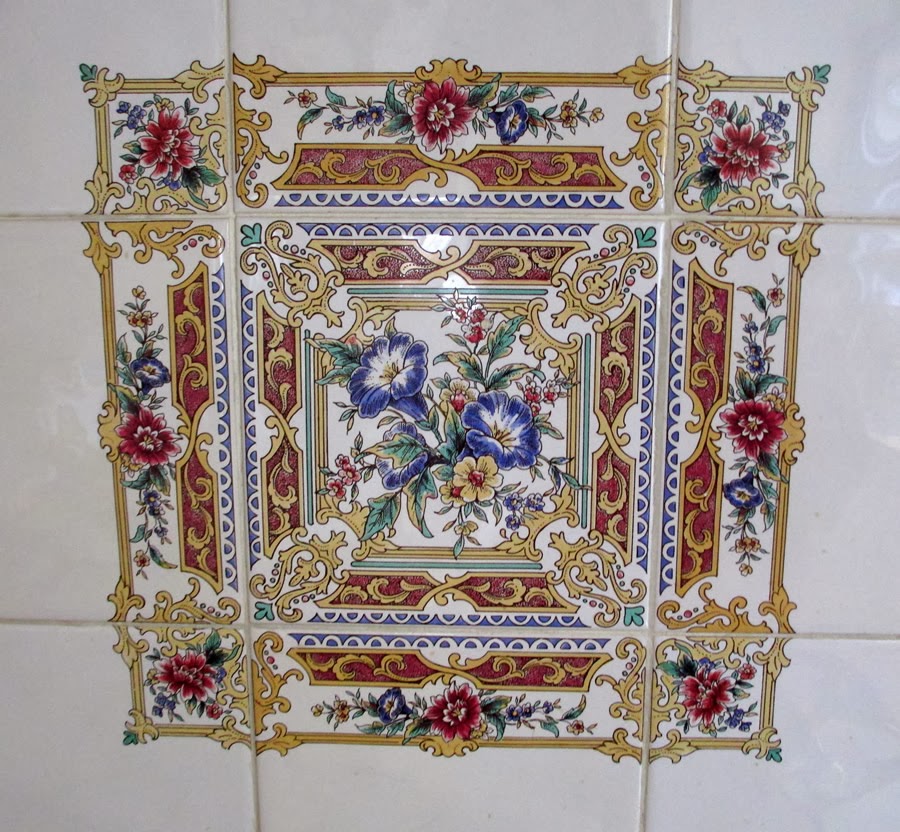 I was very sorry to lose these tiles but managed to pick up a few broken pieces from amongst the rubble which I'll use for a mosaic sometime. 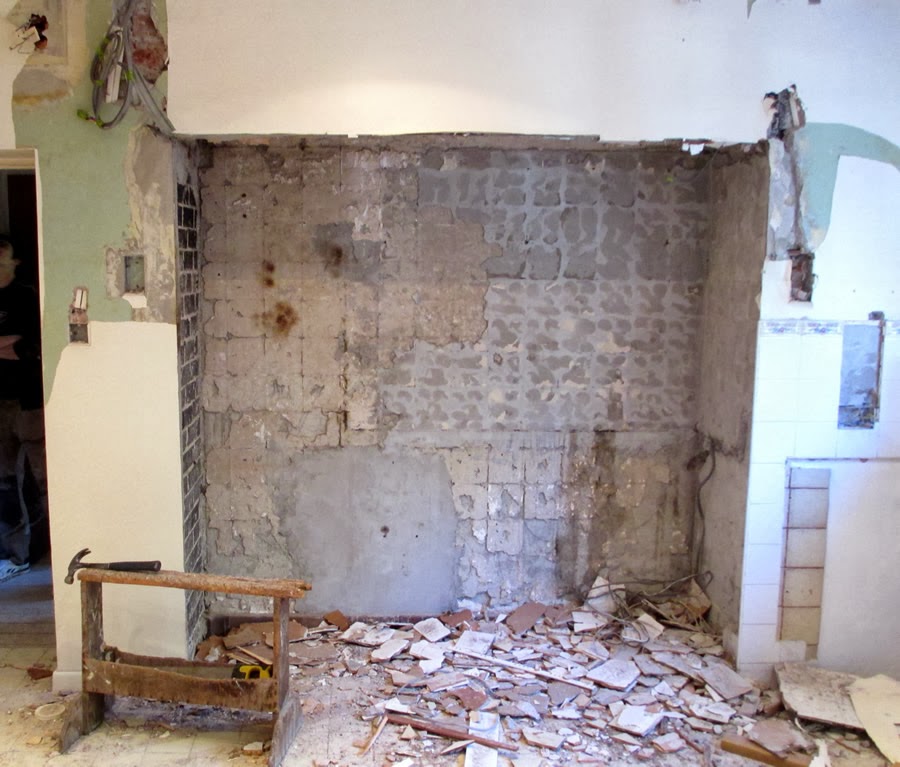 Once the tiles had been removed it was time to knock the wall down. 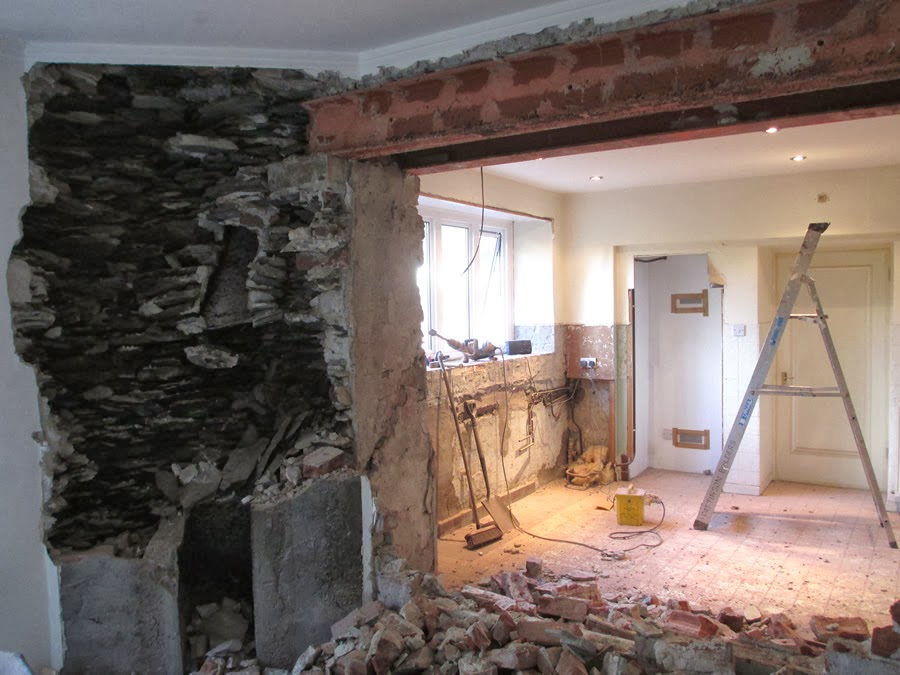 After much banging and crashing of stone and brick you could stand in the breakfast room and look into the kitchen. It felt very strange. 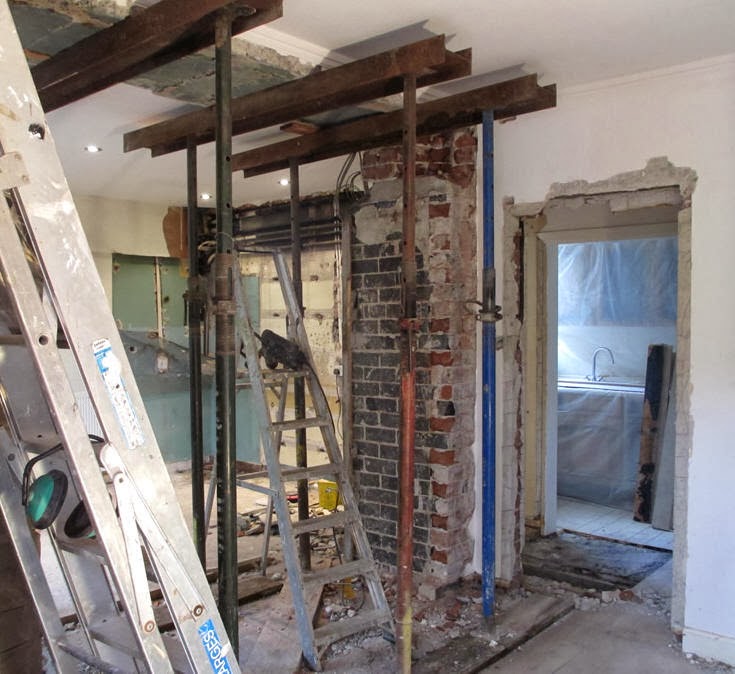 The enormous stone chimney above the demolished wall needed supporting until strong steel beams could be put in place.

Over several weeks the work continued and I confess at times I wished we hadn't started as dust and grit spread everywhere. But of course there was no turning back and by mid December the plastering was almost complete. When the new kitchen units were delivered I suddenly felt the end was in sight. At this point Christmas was only ten days away. 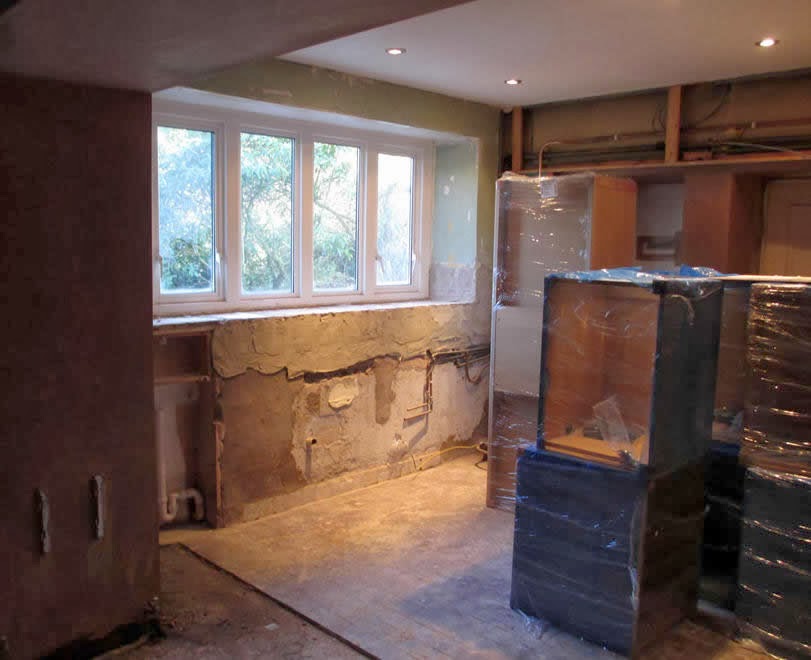 A week before Christmas the new oak floor was put down and the units fitted. 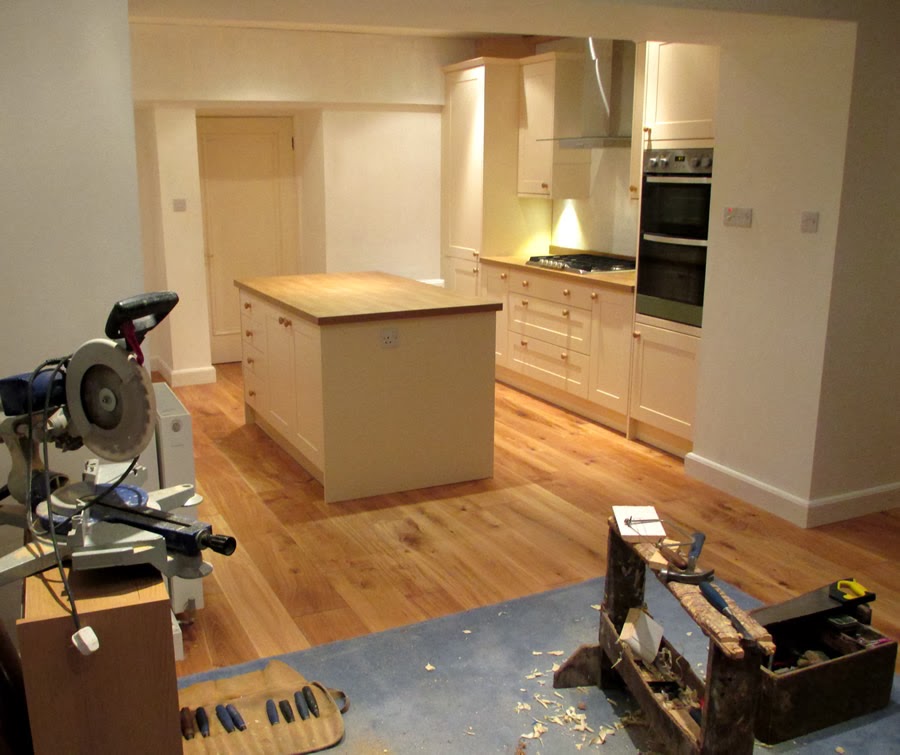 Four days before Christmas the builders finally left and we were able to move back into the sparkly new kitchen.

We bought this 1940s table from a used furniture shop when we were first married and have always used it in the breakfast room so it was the first item to be returned. Next came the old chairs and then a mug of tea and a biscuit or two. 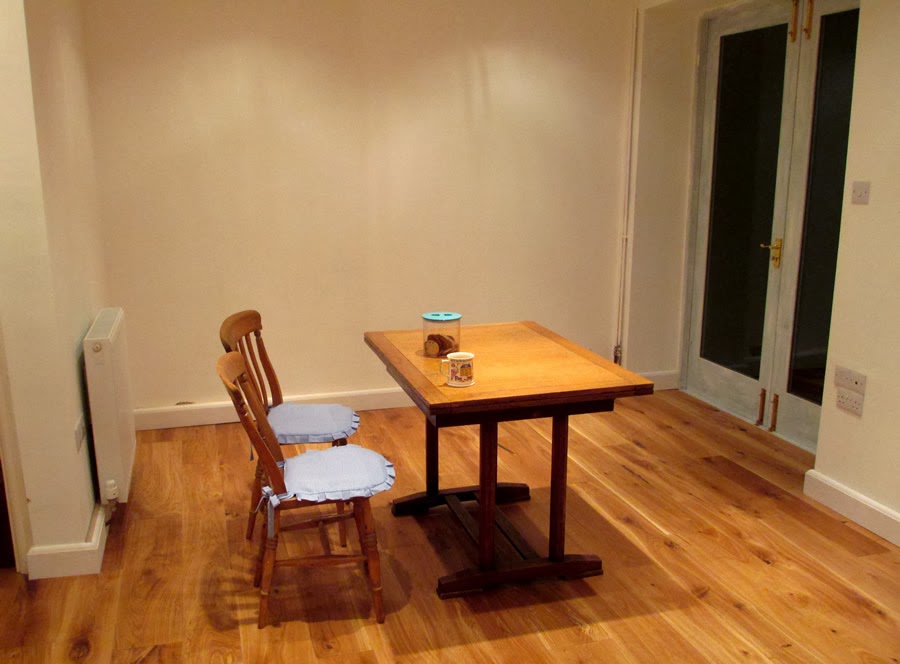 At this point I'd not started decorating the house for Christmas so to bring a bit of festive cheer into the new room I spread a scarlet cloth on the table and collected greenery from garden. The small room behind the table is the pantry which we've always had and decided to keep. I'm so glad we did as I'd be lost without it. 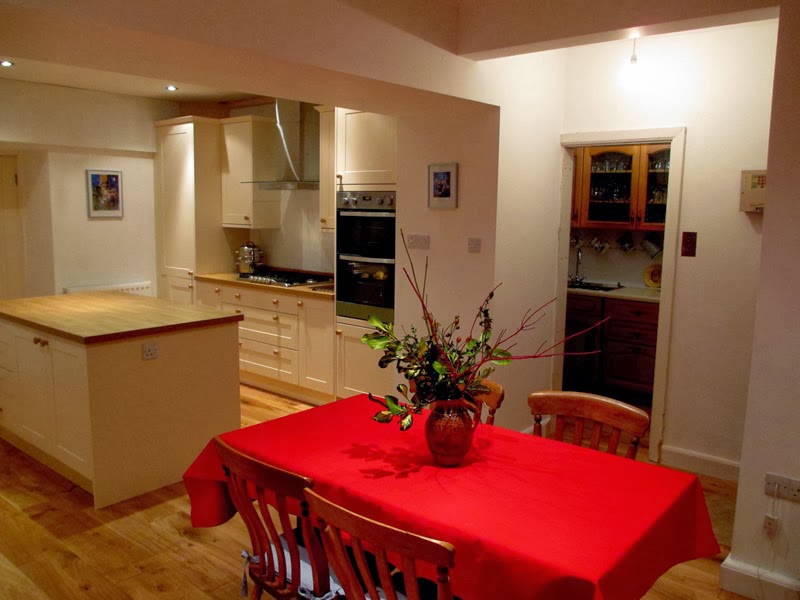 The new curtains were hung, the dresser was returned and the china put back on the shelves. Finally, with just two days to go, everything was ready for Christmas. 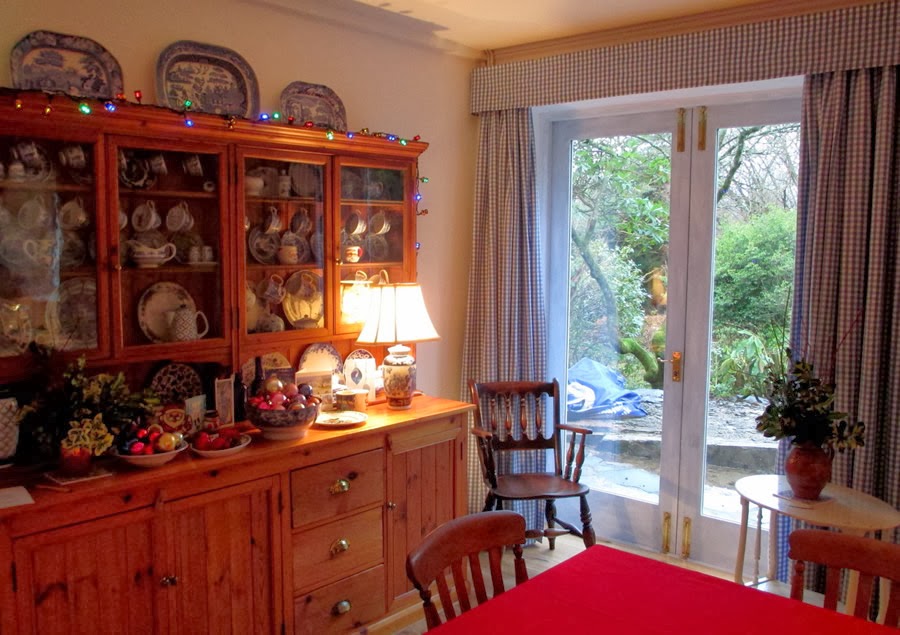 Now that the breakfast room window has become doors we can walk straight outside and into the new area of garden we are planning to create. It certainly isn't garden weather here in England at the moment so I'm spending my time knitting bits and pieces for a charity I work with.

I've seen recent weather reports from around the world and whilst many of us in the northern hemisphere are being flooded or frozen there are many people in the southern hemisphere who are suffering from intense heat. Whatever your weather I hope it doesn't spoil your fun this weekend.