A small brown box arrived in the playroom this morning and within seconds Lucy Lavender was taking a look inside. She opened the lid and peered into the dark interior while a few onlookers waited in anticipation. 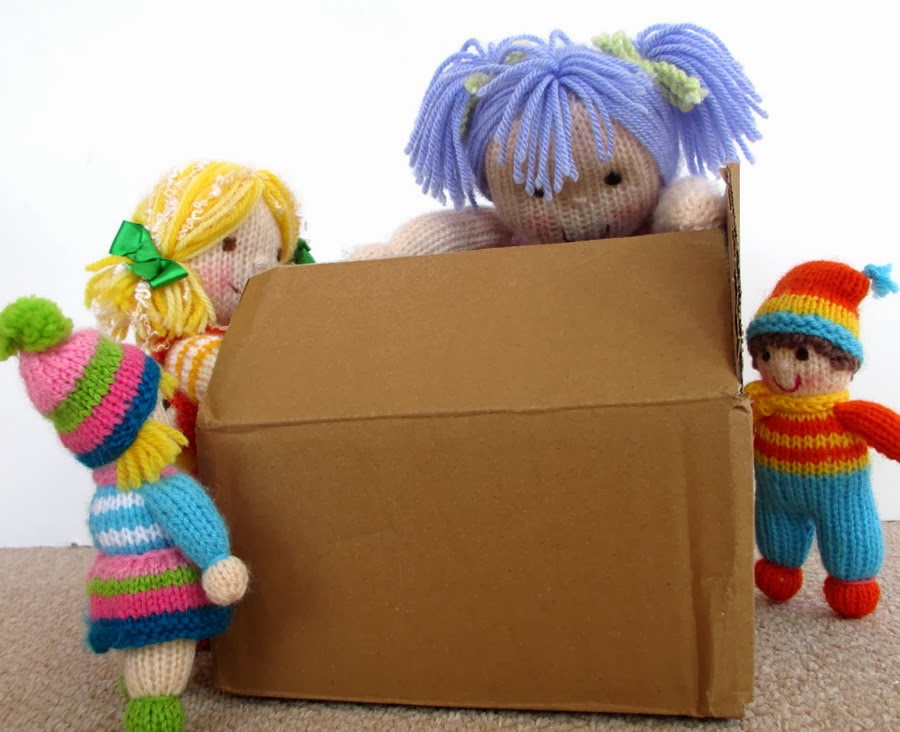 Lucy could see nothing so she opened the box a bit further and a tiny flower appeared. 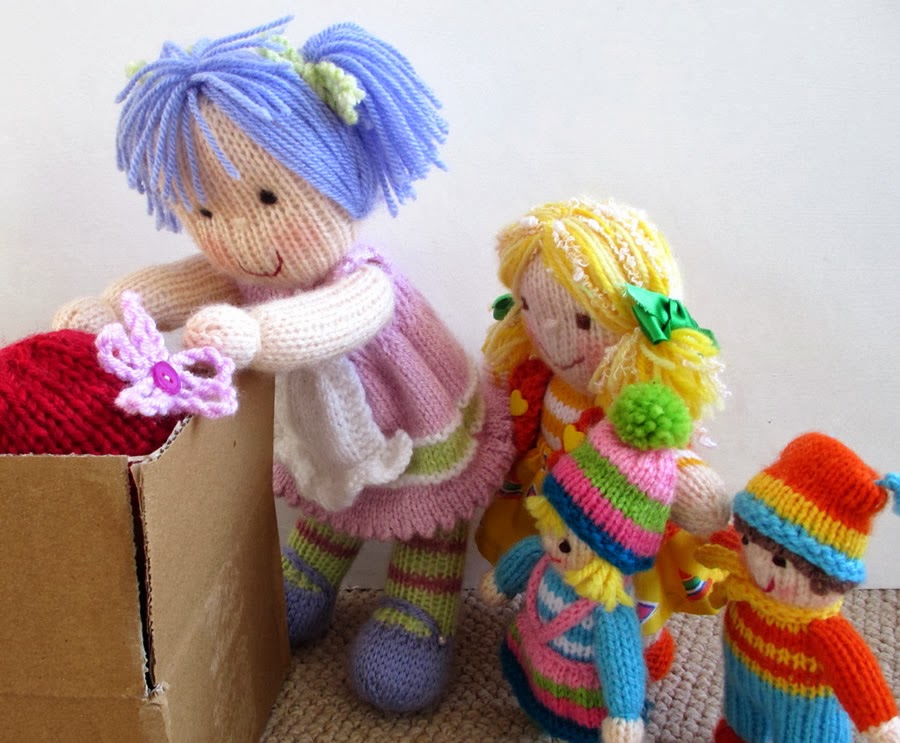 Then the top of the box suddenly burst open, the flower popped right out and everyone fell over in surprise. 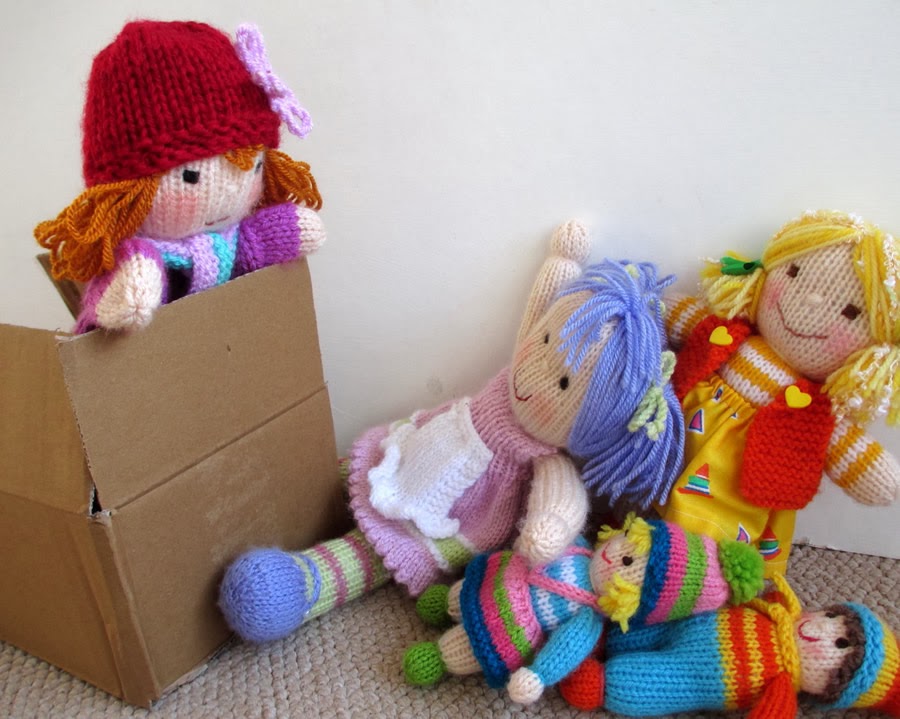 The flower was attached to a little red hat and the little hat was on a little doll's head.

The doll waved a little arm and then quickly disappeared back inside the box. 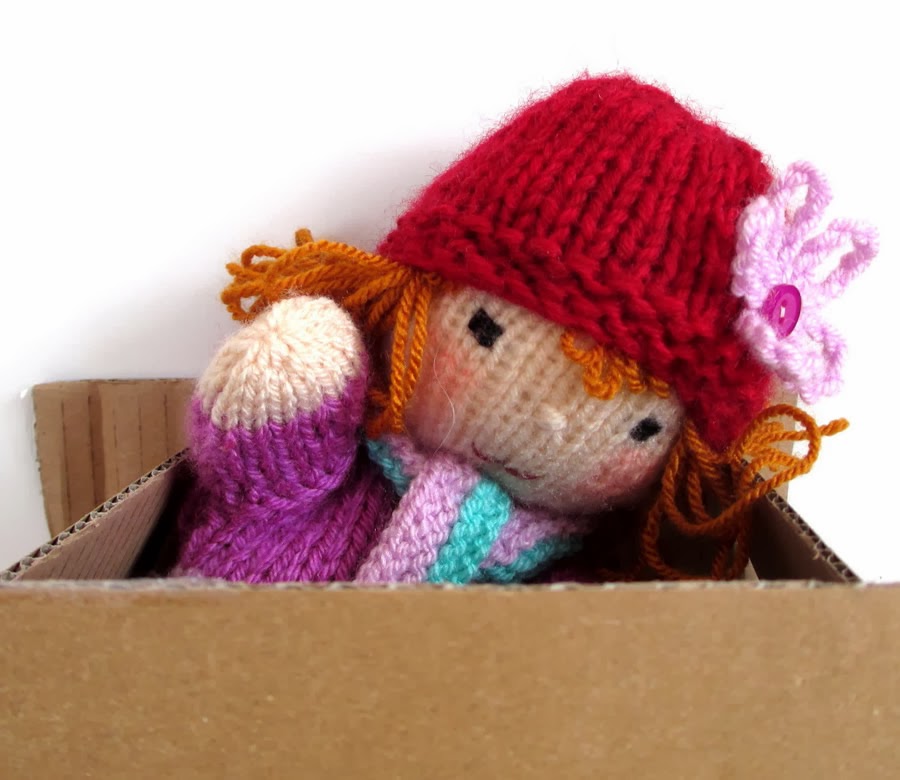 Before long another little flower popped out. This time it was attached to a little green hat that was being being worn by a different little doll. Then both the dolls popped out at once. 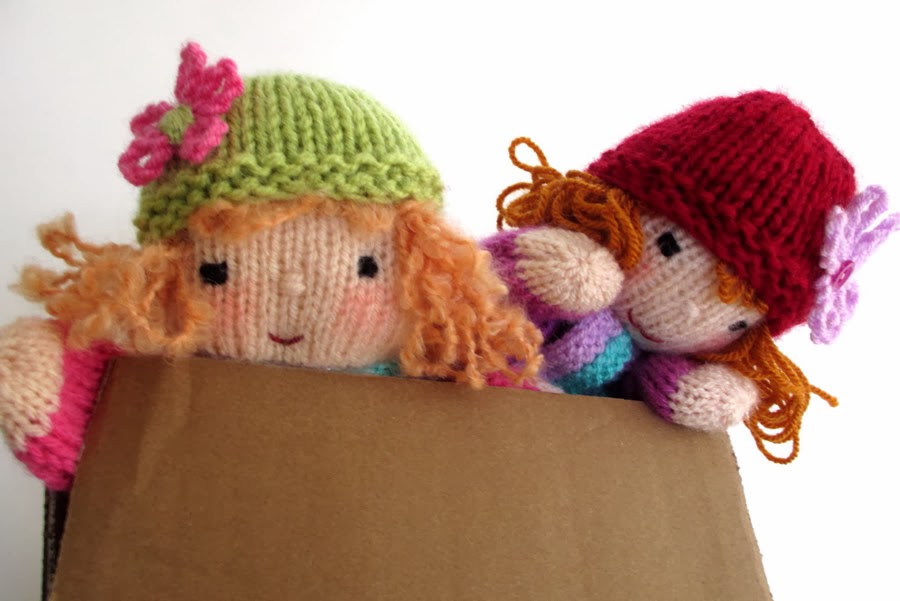 And then they jumped right out of the box. 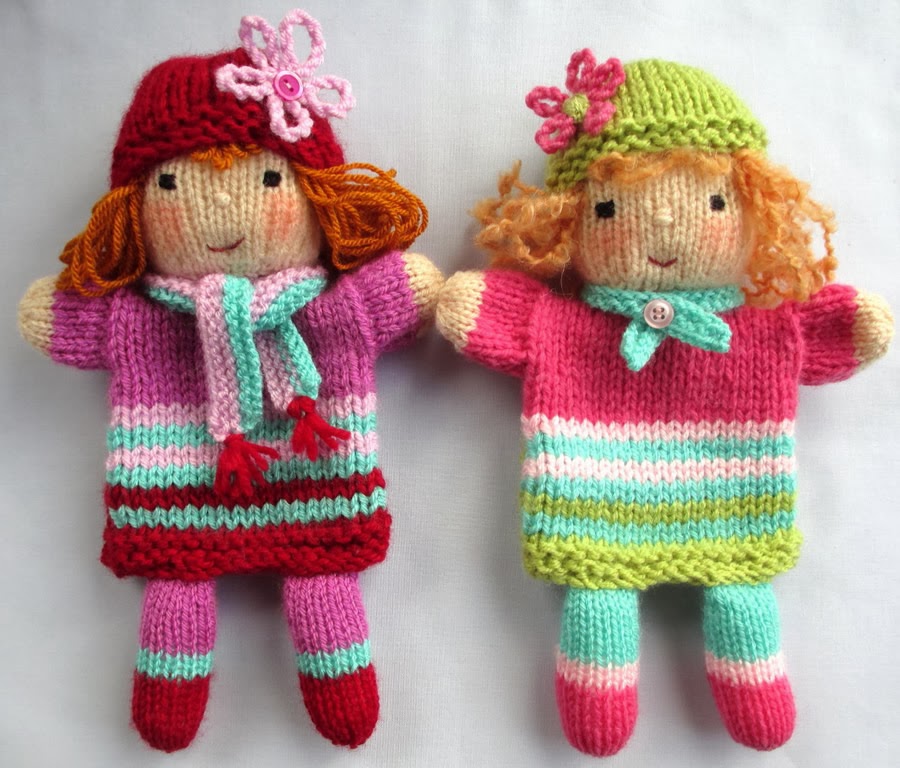 But oh dear! They were very strange looking little dolls as they didn't have any stuffing in their arms and bodies. 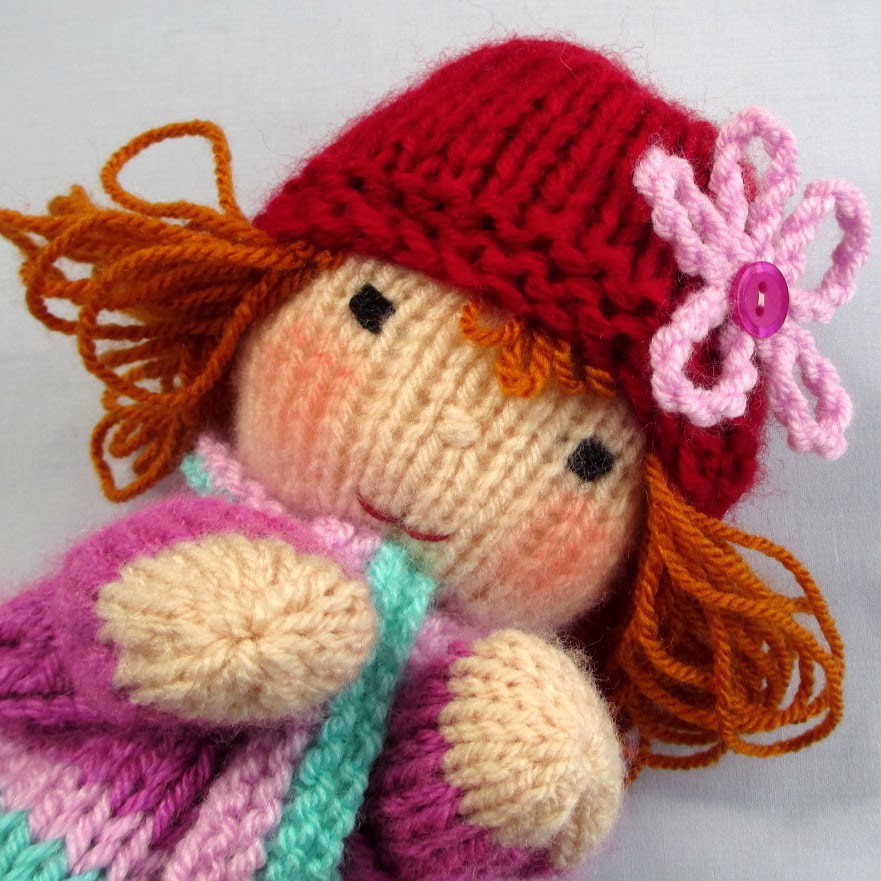 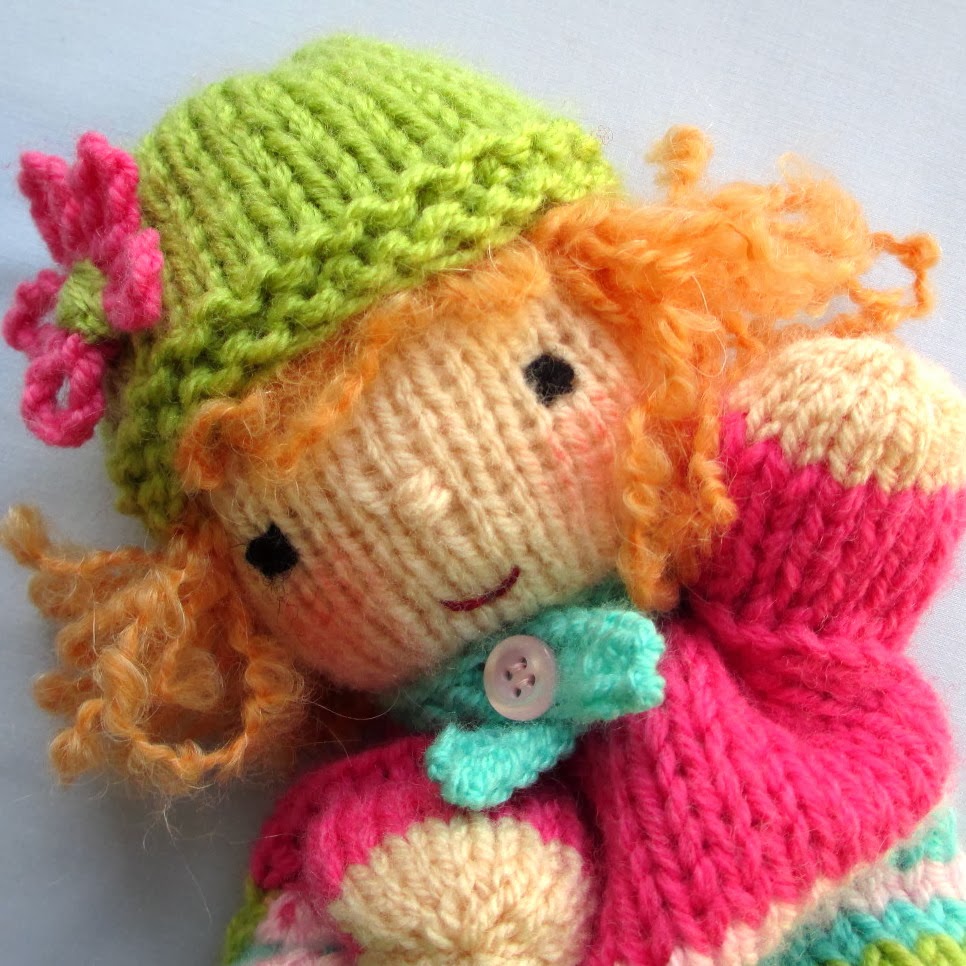 With just a bit of help from human hands these little puppets can move their heads and arms and become very busy little dolls indeed. 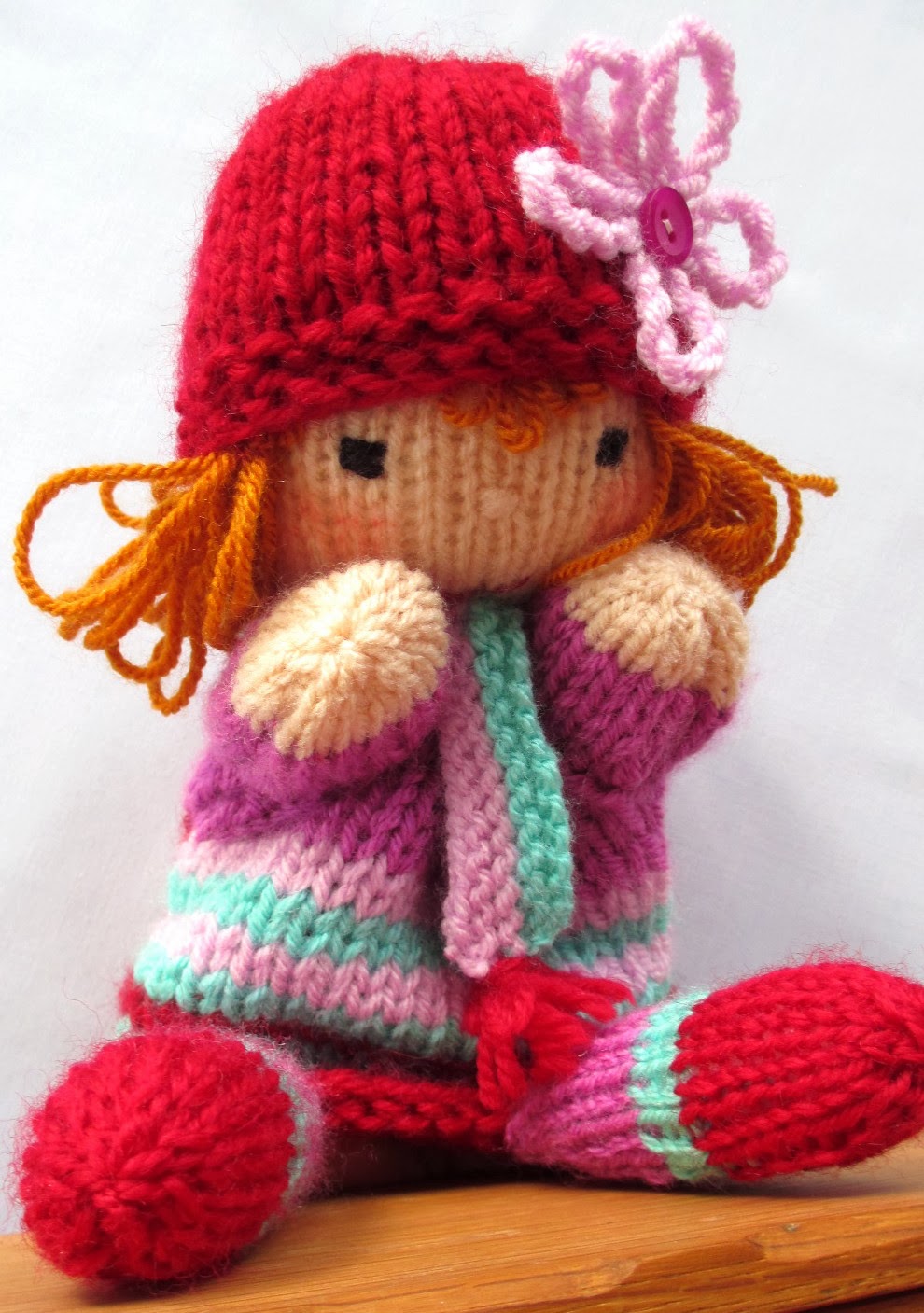 And when the day's fun is over they like to take a rest. But they hate to be left limp and lifeless on the playroom shelf . . . . . . 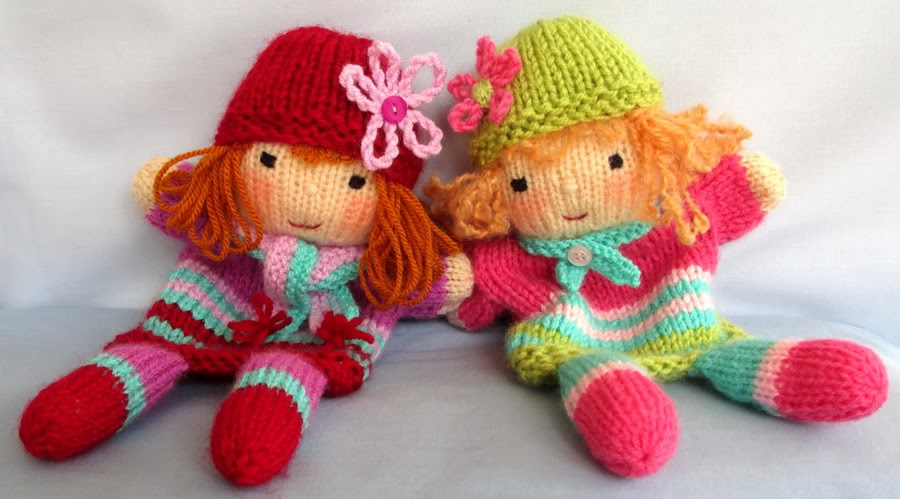 . . . . . . . . . All they need is a little bit of something soft stuffed into their tiny bodies and they will happily sit very straight and upright alongside all the other dolls in the playroom and no one will ever know they are actually hand puppets. 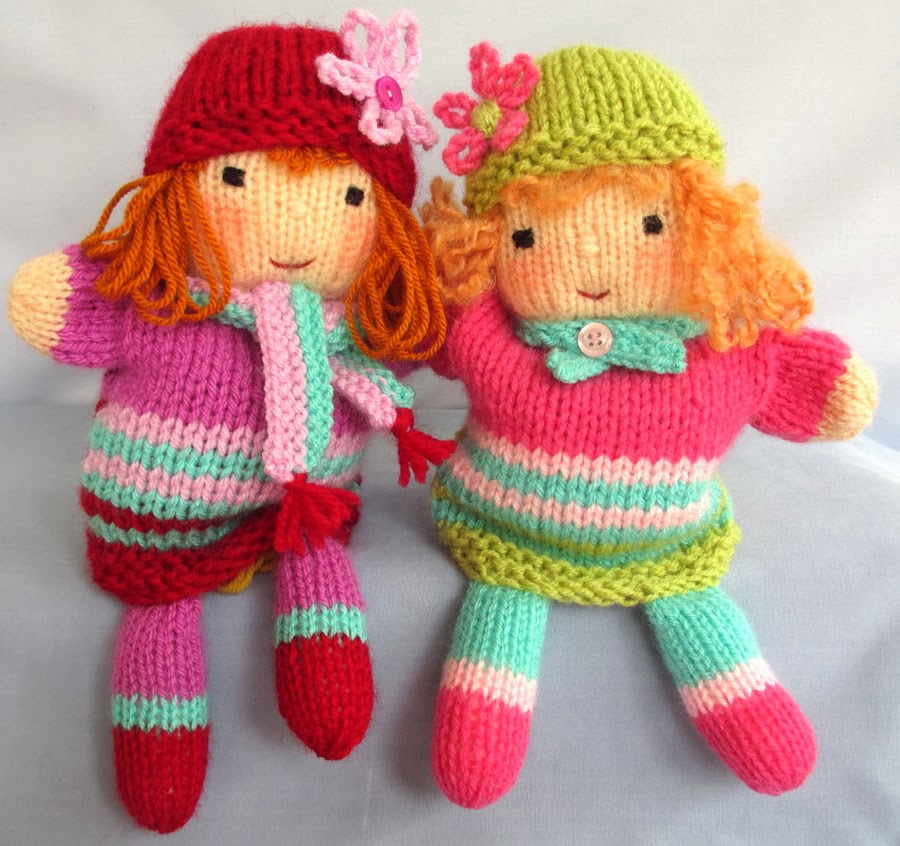 Meet Ruby and Rose, new arrivals in the playroom. I've often looked at knitted hand puppets designed for children and thought how sad and limp they looked when not in use. So I decided to create a pattern for little dolls that could be made to look plump and happy even when they weren't being played with. If children pop something soft inside such as a pair of socks or mittens the dolls will immediately stop being lifeless puppets and be able to sit up straight like all the other dolls.Then when it's time for them to become puppets again the soft interior can be removed and they will be ready for play.

A knitting pattern for Ruby and Rose can be found in my Dollytime Etsy Shop and Ravelry shop (see shop details at the top of this post).

THANK YOU FOR YOUR KIND COMMENTS:
I just wanted to let you know that a lack of comment from me does not mean I haven't popped into your blog to say hello. I regularly make return visits to blogs but get hugely frustrated when the comment I leave disappears as it is sent. I know many of you are equally frustrated by this and there seems to be no easy solution! (I'm able to use Outlook, Firefox and Google Chrome). Any ideas anyone?

Have a good weekend everyone
Eli x

Many of Britain's school children are having their half-term holiday this week and quite a few of them have come with their families to explore the Lake District. Little girls wearing pink anoraks seem to be everywhere.

Pink is a favourite colour here in the playroom . . . . . sometimes! 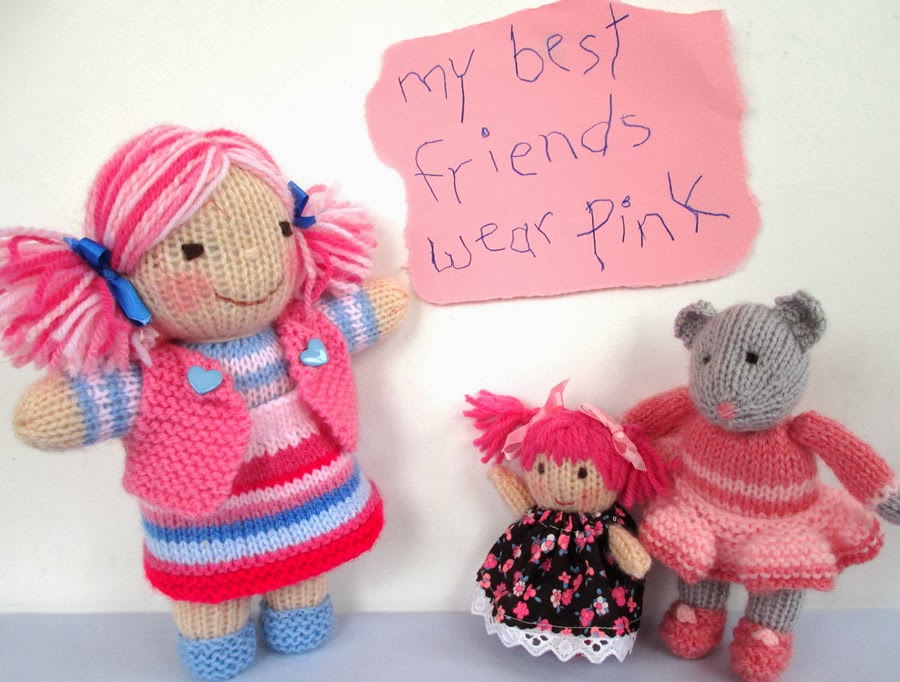 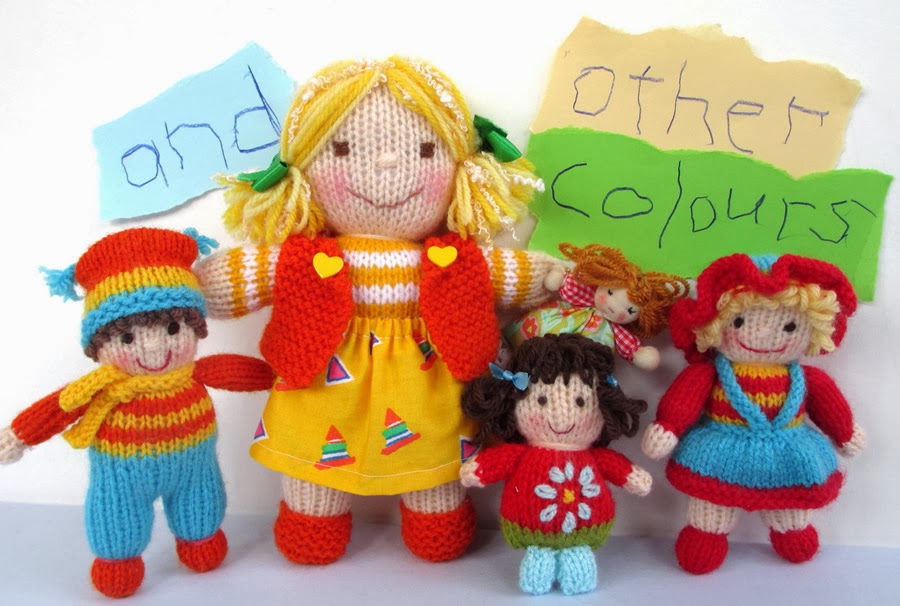 Thank you for all your nice comments following the previous post. I'm glad you liked the bear pictures. Here is another one you might enjoy. 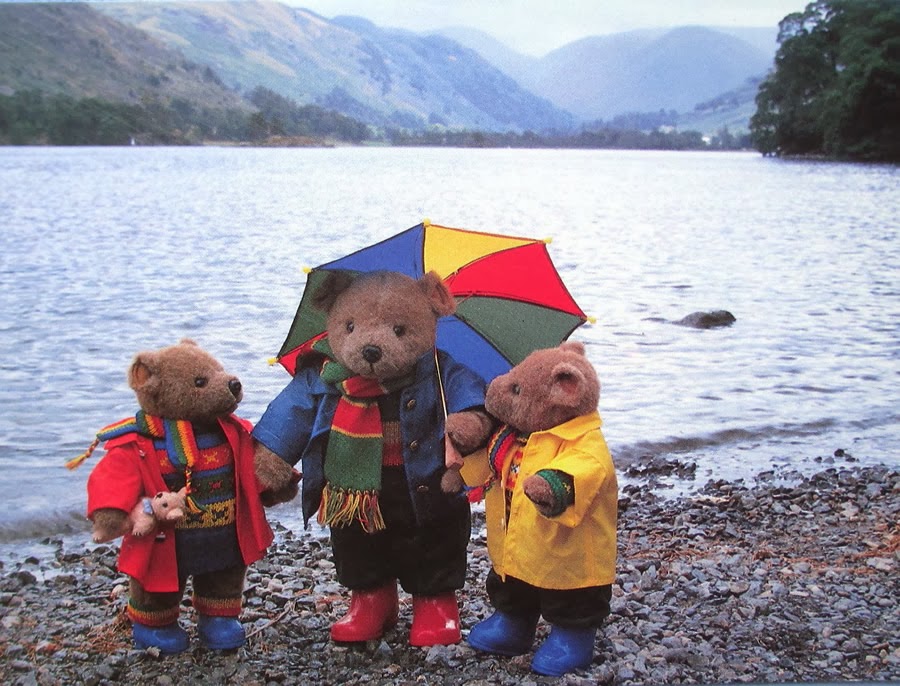 I hope anyone enduring extreme weather will soon find more seasonal conditions returning. No need for words to describe our current climate, this picture says it all.

Greeting friends, from a totally rain-soaked Britain. No need to bore you all further by describing the weather we've endured over the past few weeks. It's been too dark and dismal to photograph inside or out so I'm showing you a couple of postcards of our area which seem appropriate. 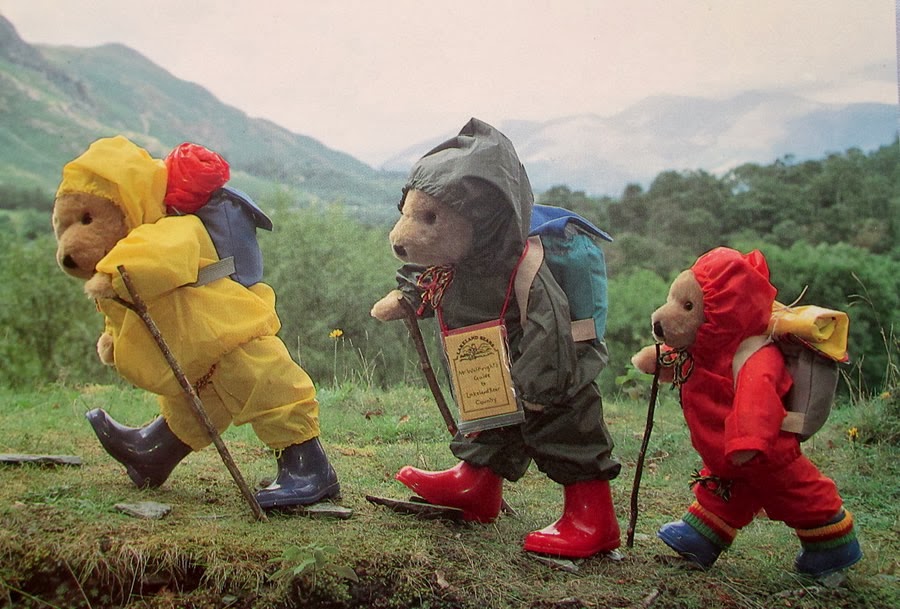 Here in the mountainous Lake District a few hardy souls have ventured onto high ground. A punishing pursuit as they've been lashed by storm force winds and driving rain.

Many water-logged footpaths are now unstable and of course the mountain rescue service has been kept very busy. 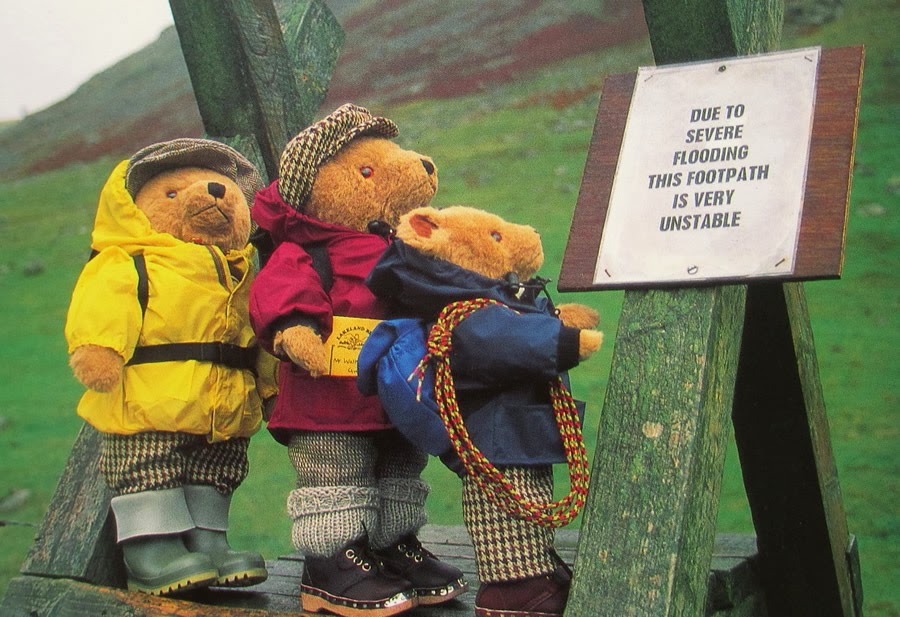 But compared to coastal and low-lying areas elsewhere in Britain we've been fortunate as storm water rushes straight down the rocky hillsides and into the lakes.

My thoughts are very much with those whose homes and local areas have been damaged by hurricane force winds and flooding.