The playroom door has remained firmly shut for the past couple of weeks as there has been much talk of pirates here at Flutterby Patch.
My daughter has always been a fan of ocean going adventures such as 'Hornblower' and loves the movie 'Pirates of the Caribbean', and so I wasn't surprised when she showed me these colourful pirate flags that she'd designed for her Etsy shop. 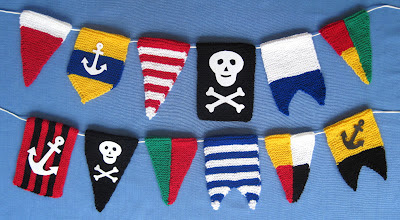 She'd also been working on a pirate to accompany the flags but wasn't sure how he should look. Should he look mean or friendly? Over Easter we put our thinking caps on and discussed various options. We both knew which book would be first out of the bookcase. This was one of my daughter's favourites when she was younger and needless to say is very well thumbed. 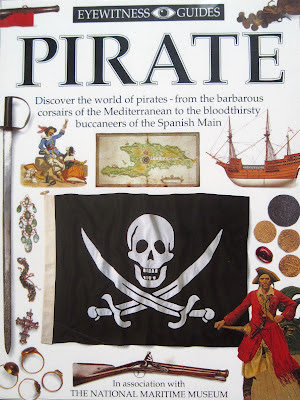 We searched on the internet for pirate images and were overwhelmed by the variety. In the end we concluded that her pirate should look more comical than cruel. 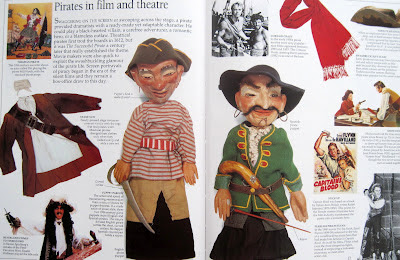 Once started, the pirate took shape quite quickly. He had an eye patch (of course), striped jumper, scarf, belt and long boots with turn-over top. By giving him a large nose, straight mouth and upturned eyebrow he looked like the sort of pirate you definitely wouldn't want to meet on a dark night! But very quickly we decided he looked rather lonely and needed a shipmate. 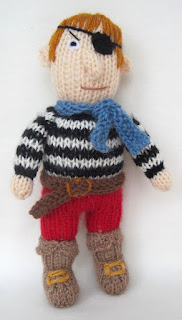 It was quite amusing to watch this little fellow taking shape. He is worked from the same basic pattern as the one above but his facial expression give him a completely different character. This pirate we decided had been in one battle too many. He has a stump and and a hook. But now surely there should be a third member of the group. 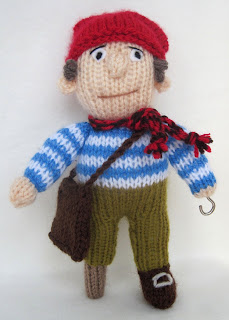 And here he is with his bead-trimmed dreadlocks. 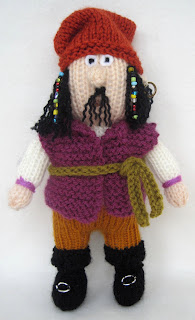 What a terrifying trio they make!! 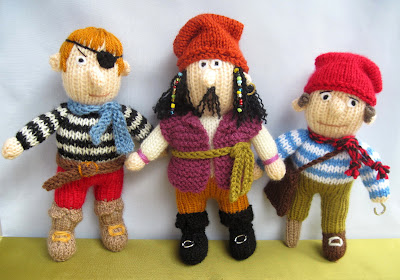 Daughter and I both dream of finding treasure one day so for obvious reasons this is our favourite part of the book. 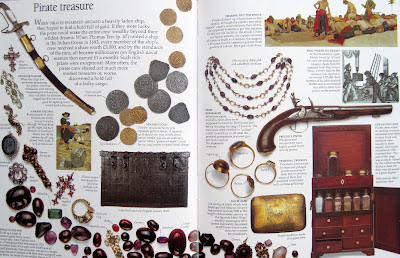 As luck would have it daughter has a replica wooden chest which made the perfect prop for this scene. Some old necklaces became the treasure, although judging by the reaction of the pirates I'm not sure it was quite what they had hoped to find when they opened the lid. 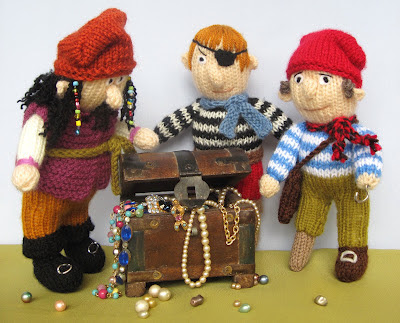 Over the years my daughter has collected quite a number of nautical bits and pieces and this page in the book reminded her of another essential item in her collection. 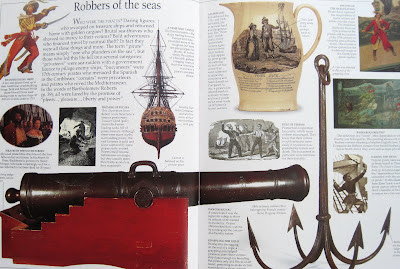 And here it is, a replica cannon. I can't remember when or where she bought it but I know when she saw it she just had to have it. And so, several years later it is being put to good use! With beads being used as cannon balls and a bit of gun powder (or soap powder) this motley crew will be a force to be reckoned with . . . . . . . . So now you can see why the playroom door has remained firmly shut. 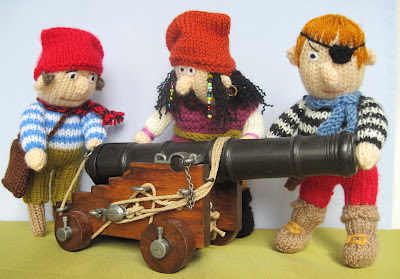 If you  know any young pirates who would welcome shipmates like these then you can knit your own motley crew. The pattern for the 3 pirates and the bunting flags can be found in my daughter's Toyshelf Etsy shop.
Labels: At home, knitting

Greetings friends. I hope you've all had an enjoyable Easter. My daughter stayed with us over the weekend and I'm happy to say the box of chocolate nest cakes that the dolls were looking after remained unopened until she arrived. She'd mentioned a couple of weeks ago that she was knitting something 'round' as an Easter gift for me so I naturally presumed it would be egg-shaped. When she passed me this little tissue covered surprise I let the dolls take the first peek inside. 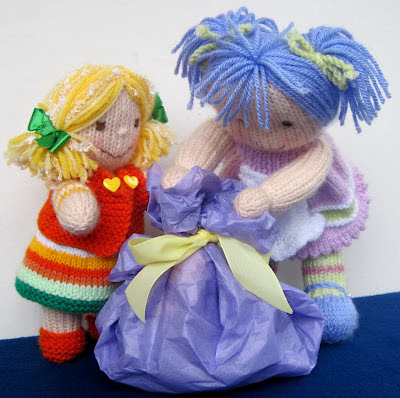 And just look at the little cutie that popped out! She certainly wasn't the egg shape I was expecting. 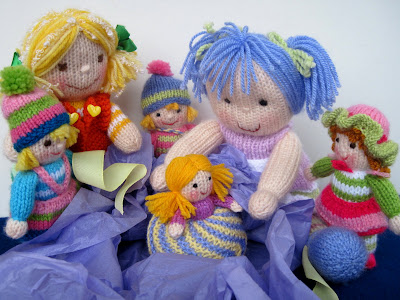 Of course everyone in the playroom was delighted to find a new playmate. 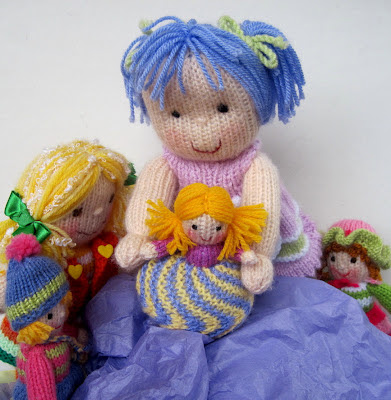 But this little girl is not destined for the playroom as she will sit next to my sewing machine and hold my pins. 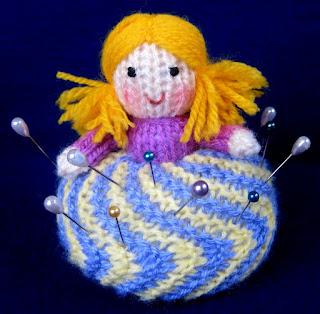 My daughter had mentioned a few weeks ago that she was working on a new pattern to list in her Etsy shop. This little girl is one of three dolls (small, medium and large) that she designed for children to play with. When she'd stuffed them she decided they would make great pincushions.

As she had brought the two larger dolls to show me we couldn't resist covering their skirts with all kinds of treasure. The vintage brooches belonged to my mother and the tiny rings were stashed in my daughter's childhood jewelry box. I think they'd look great sitting on a dressing table holding bits and bobs. 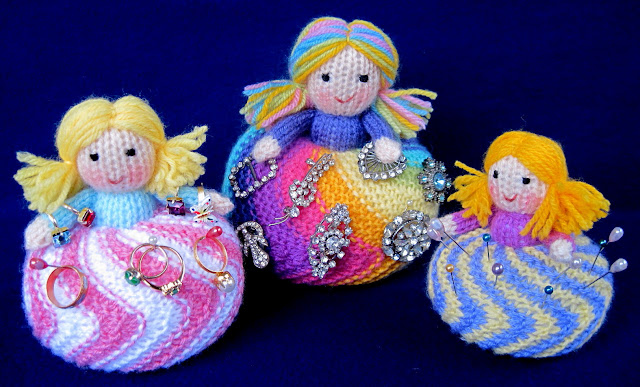 Lucy Lavender seemed very surprised that anyone would want to carry pins in their skirt. I just hope she doesn't try any experimental pin-sticking amongst her dolly friends in the playroom! 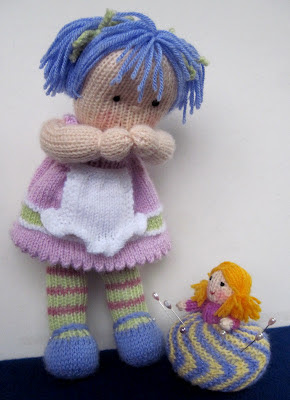 My daughter has named these little characters 'Twirling Doughnut Dolls' as their skirts are doughnut-shaped with twirling zig-zag stripes. The pattern made by the stripes is very easy to knit and as each doll only requires small amounts of yarn they'll be a great way to use up odds and ends. They are soft and cuddly so make safe toys for very young children. I also love the idea of using them to hold pins and other sparkly treasures. The knitting pattern contains instructions for all three sizes of doll (10cm, 12cm and 15cm).


Whilst the smallest doll now guards the pins in my sewing room the two larger dolls have gone back to my daughter's house to join the other characters on her toyshelf. If you'd like to knit your own twirling doughnut dollies you'll find the pattern in my daughter's Toyshelf Etsy shop. 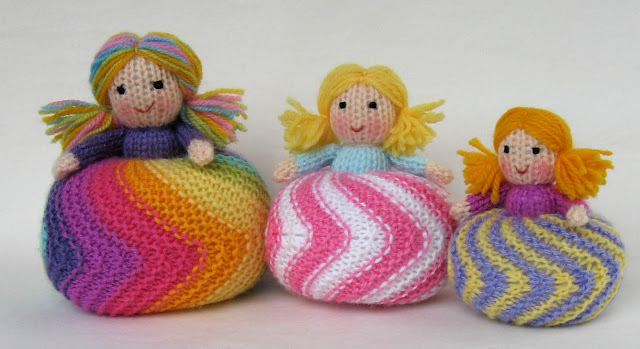 Here in Britain our activities are often governed by the weather. Last week brought the hottest March days ever recorded and this week we've had a freezing northerly blast bringing howling gales and substantial snow. But thankfully the warm spring sunshine has returned and so everyone is busy with Easter preparations. 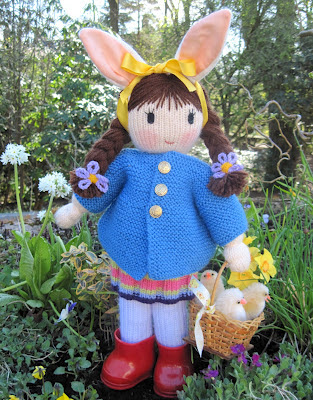 On Thursday we spent a happy afternoon in the garden. Posy gathered daffodils and caught fluffy chicks to put in her Easter basket. She insisted on wearing her bunny ears and Peter Rabbit coat. 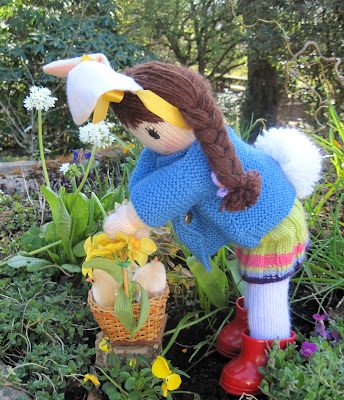 Of course no Peter Rabbit outfit would be complete without a big white fluffy tail. 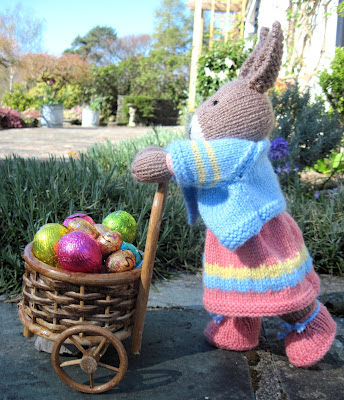 Unfortunately she'd forgotten that the eggs should  remain hidden until Easter Day? 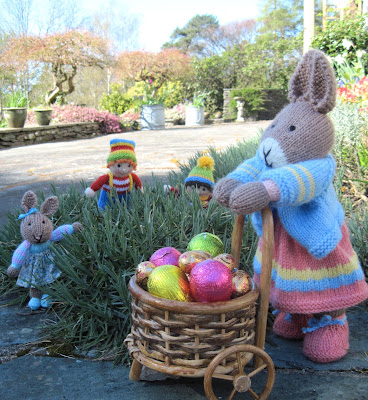 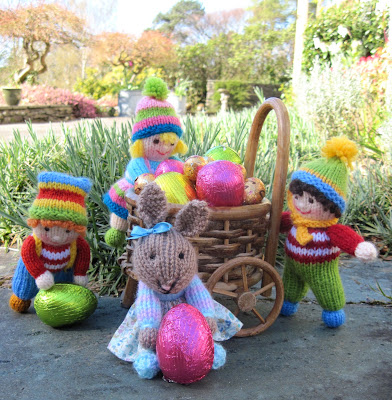 and like pirates finding treasure the little rascals raided the basket as soon as Mother Bunny's back was turned.

Later, in the playroom, dolls and bunnies (with chocolaty fingers and paws) posed for the camera. 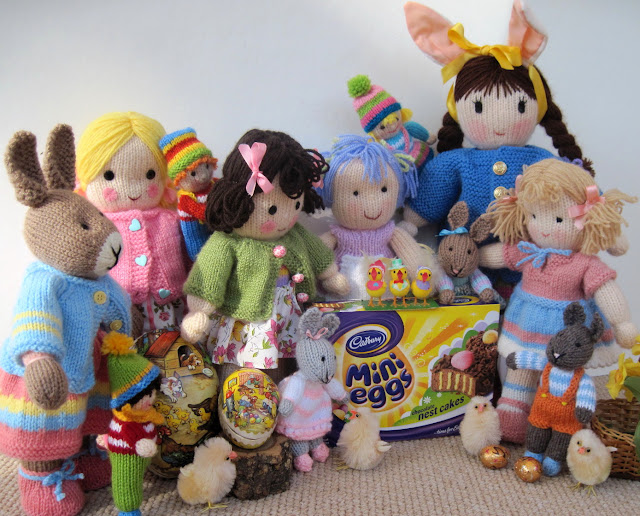 They have all promised to take good care of this box of chocolate nest cakes that I bought for my daughter who is coming to stay for a few days. These are my daughter's favourite but I can see all eyes are very firmly fixed on those yummy nest cakes and I'm wondering if there will be any left by the time she arrives. 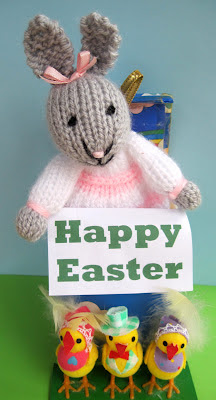