What a week we've had in the playroom! The mischievous bunny children have taken up residence in my wool basket and have spend every day creating havoc. 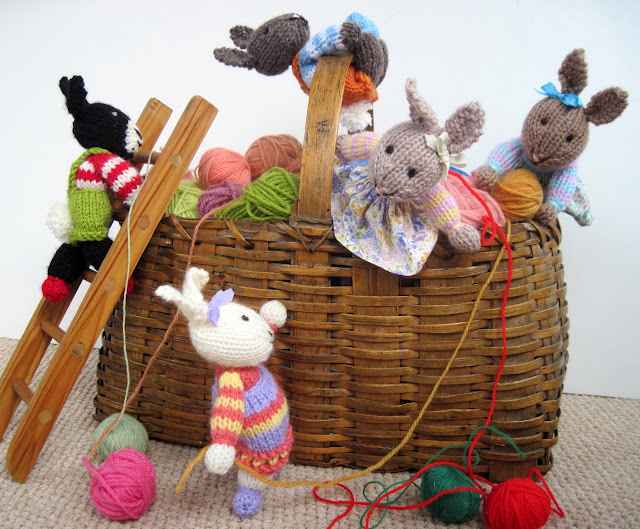 Our search for a mother bunny to look after these little ones continues. The 'Wanted - Mother Bunny' poster we put in the playroom window last week has unfortunately brought no Mother Bunnies to our door. To be honest, I'm not surprised as the five little rascals are such a spirited lot that many mothers would probably want to disown them.


Anyway, as today was fine and sunny we decided to pin the 'Wanted' notice to the old tree at the edge of the wood. Hopefully a passing bunny would take pity on the little scamps and offer them a good home. The dolls, of course, want the bunnies to 'stay forever' but I'm not sure that is a good idea as their unruly behaviour is beginning to influence some of the younger dollies. 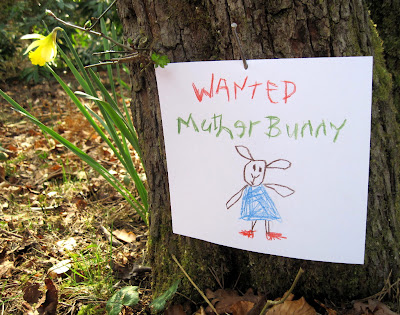 Being such a lovely spring day the ever sensible Posy volunteered to take all five bunny children for a ride in the old pram and set off across the lawn. Of course they wriggled and squirmed but Posy kept on going. 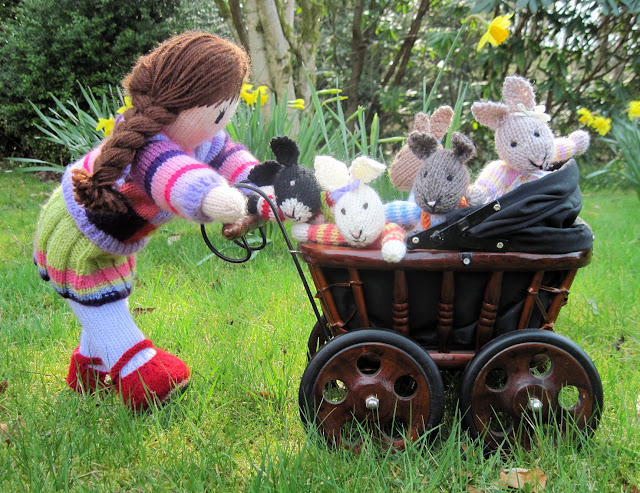 Then all of a sudden, and with no warning, they began scrambling out of the pram. Posy's loud protestations had no effect and every bunny set off at top speed across the lawn in the direction of the wood. What had startled them? . . . . . . . . . . . 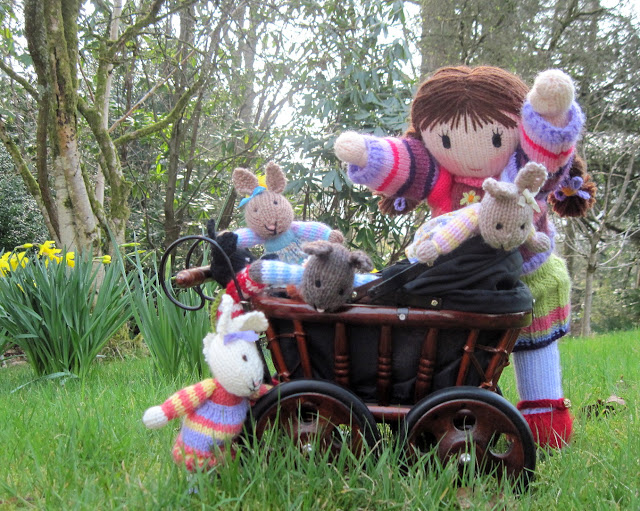 Maybe this had something to do with it! A lady bunny was looking at the 'Wanted' poster. Beside her was an empty wheelie-basket and she appeared to be very interested in what she was reading. 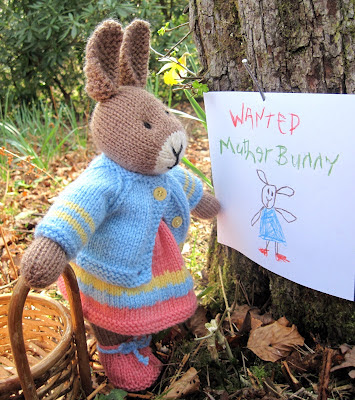 Suddenly two little girl bunnies ran towards her. She picked them up, gave them a big hug and then placed them firmly in the empty basket. 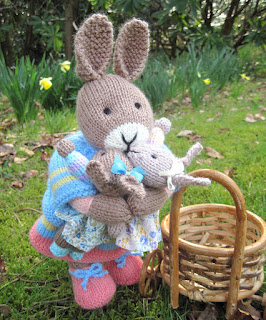 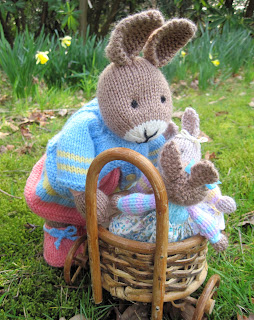 The third little girl quickly followed and was placed next to her sisters. But where were the boys? 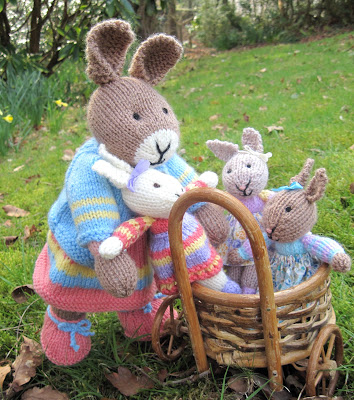 Not surprisingly the boy's escape plan failed miserably and they were unceremoniously picked up and thrust into the basket alongside their sisters. 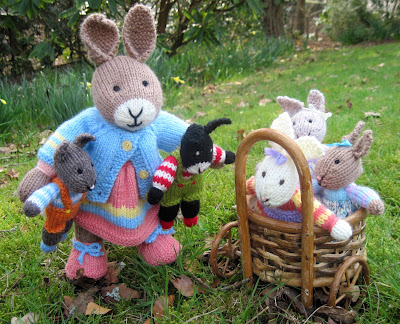 Meanwhile, Posy had returned to the playroom with the empty pram and the dolls examined it in disbelief. Was it really empty? Had the bunny children gone forever? They didn't have to wait long to find out . . . . . . . . 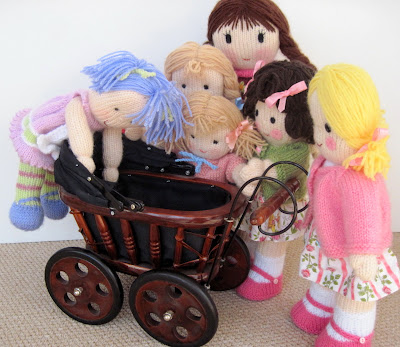 Through the playroom window they saw a wheelie-basket loaded with captured bunnies being dragged across the lawn by none other than their very own mother. She told us how one day last week her five rascals had scampered off into the wood looking for adventure. When they failed to return she feared she would never see them again. But here they all are, alive and well thanks to the care given to them by the dolls. She asked if she and her children could she stay for a while in the playroom. 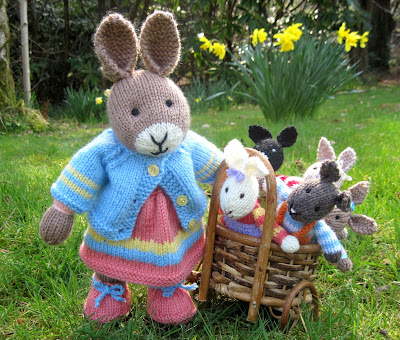 This was the response she got! Need I say more! 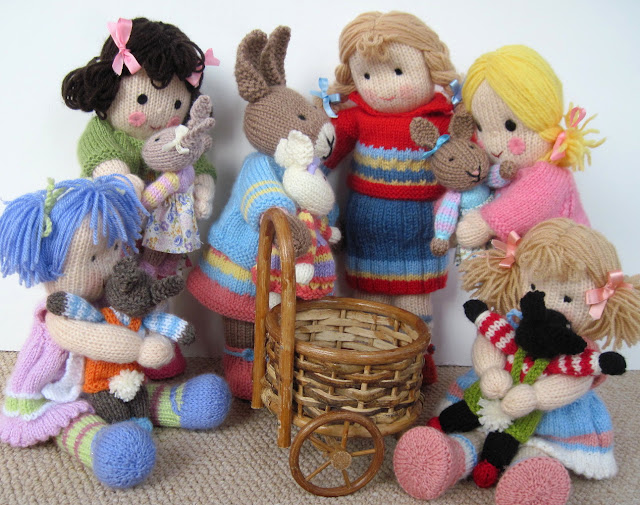 So many of you said such nice things about my pattern for the 'Baby Bunny in a Basket' that I decided a Mother Bunny would have to come next. And so here she is. 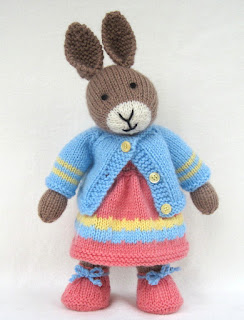 A pattern for the Mother Bunny in this blog post can be found in my Dollytime Etsy shop.

'Baby Bunny in a Basket Crib is available from my Etsy shop. 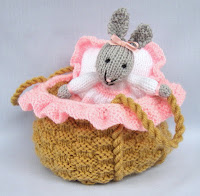