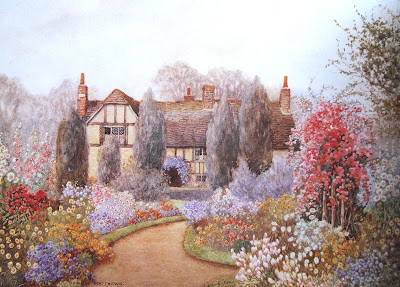 Imagine you are a wealthy Edwardian lady with a beautiful house and garden like the one above. Isn't it gorgeous. You would, of course, have a gardener who would keep the lawns manicured and pick fresh flowers to fill your pretty house with scent and colour.

Then one day the gardener complains that large leathery leaves have mysteriously appeared in his carefully tended flower borders. He cannot identify them as there are no blooms. You decide to leave them growing just in case something beautiful or unusual appears. 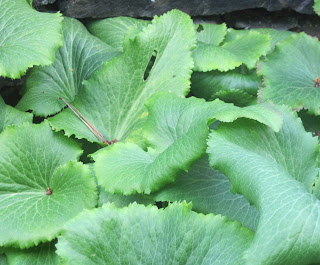 The following spring several buds emerge and within a few short weeks these spiky beauties appear. They are 'eryngium gigantium' (sea holly). 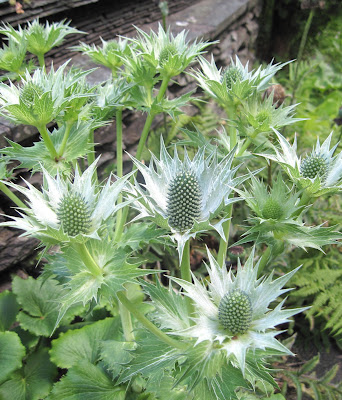 In Victorian and Edwardian times, if these plants mysteriously appeared in your flower borders the chances were you had been visited by a well known plant enthusiast named Ellen Willmott. She would regularly taunt her friends by scattering seed of eryngium gigantium in their gardens and must have carried seed with her wherever she went. 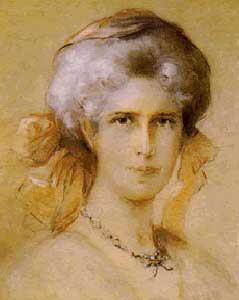 The flowers are tiny and are clustered on the central cone. They are surrounded by wonderful grey/white bracts that shine like silver in the summer sun and on a moonlit night they appear a ghostly white. Friends of Ellen Willmott eventually became used to these plants popping up uninvited in their gardens and they became know as Miss Willmott's Ghost. 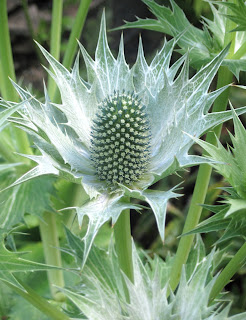 I heard this story a few years ago and couldn't resist buying a packet of eryngium gigantium seeds to scatter in the garden. Nothing appeared so I forgot about them. Last year some strange leaves emerged which I thought were probably weeds. Then suddenly, in the last few weeks Miss Wilmott's Ghost has put in an appearance.......magic! 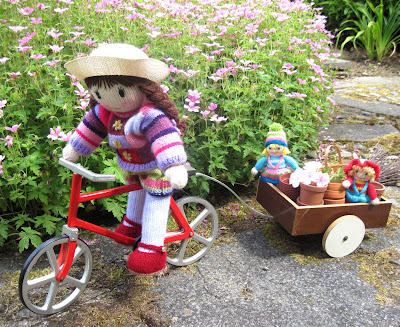 Elsewhere in the garden Posy has been hard at work. She is the only dolly whose legs are long enough to reach the pedals on this old bicycle and so she volunteered to pull the trailer loaded with pots and garden tools (plus a few helpers). 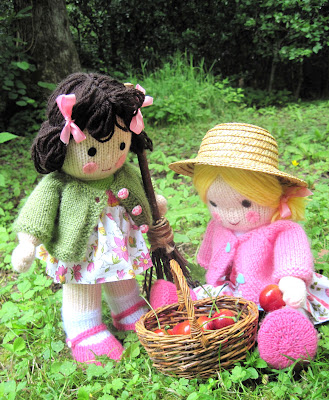 Meanwhile, Polly and Kate have been in the orchard gathering cherries. Every time they count them there are less cherries in the basket. I'm not sure how many will remain by teatime!

I'd better get back to the garden whilst the sun continues to shine. Enjoy your weekend.