There's been much activity in the playroom this week as Posy has been teaching some of the dolls to knit. Yesterday, when they were squabbling over the coloured pencils Posy told them to each choose a pencil so that they could knit it a warm jacket!

Each doll chose a coloured pencil. 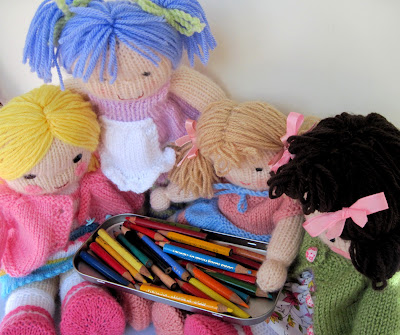 Then they chose some yarn and fetched their knitting needles. 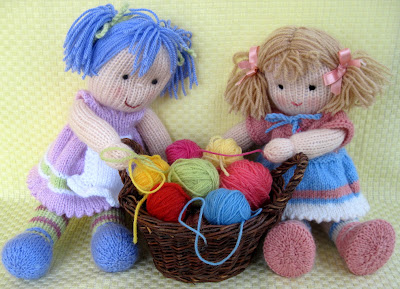 Next they carefully cast on 12 stitches and the race was on to see who was first to knit 10 rows. There were several dropped stitches along the way but with a little help and a lot of perseverance . . . . . . 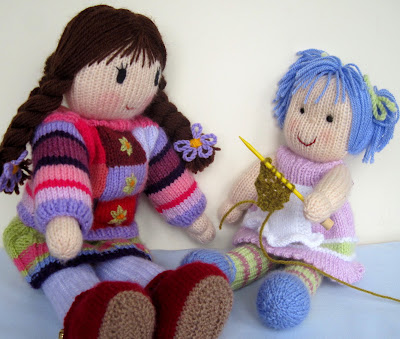 . . . . . everyone eventually managed to complete
10 rows of knitting. 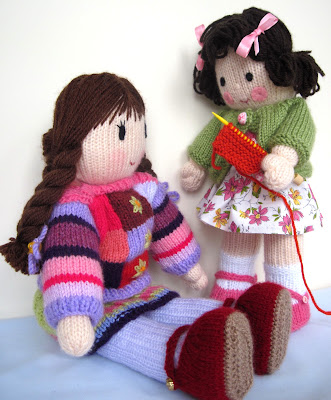 The knitting looked quite neat although some of the yarn had become badly tangled. 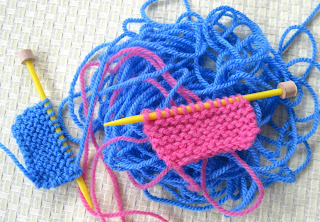 Once all the knitting had been cast off it was Tilly's job to stitch a warm woolly jacket round each pencil. To do this she wrapped the knitting round the pencil and over-sewed the cast on edge to the cast off edge; then she closed the top. 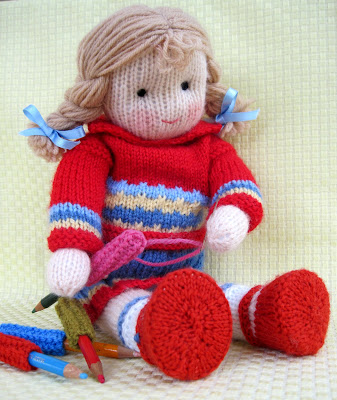 When all the pencils had been given a warm jacket Tilly lined them up for everyone to admire. 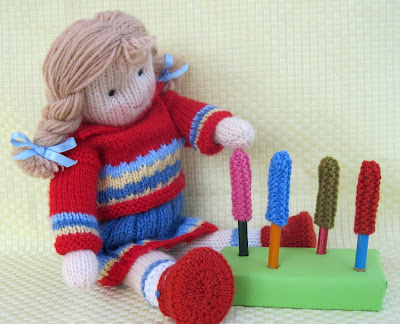 The pencils looked very snug in their new jackets. 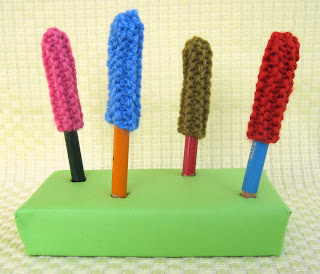 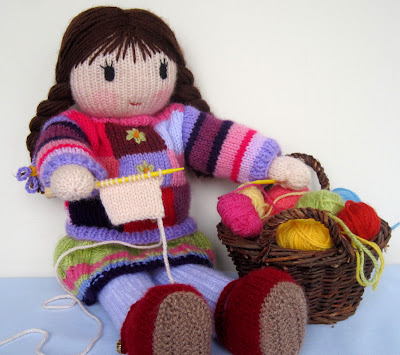 When all the dolls were safely tucked into their beds Posy began making some little heads for the pencils. This is how she did it.

How to make a head

Cast on 12 stitches and knit 10 rows in stocking stitch (alternate a knit row with a purl row). Don't cast off. Cut the yarn leaving a 15cm (6in) tail and using a tapestry needle take the 12 stitches from the needle onto the tail and gather the knitting. This will be the top of the head.

Fold the knitting in half and stitch the sides together. This seam will be at the back of the head.
Stuff the head and make it really plump and rounded. Gather the open end and stitch it firmly to the top of a pencil (see below). 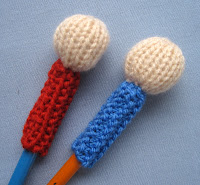 Posy made four little heads.Then she stitched on woolly hair and a smiling face. Finally she made little arms from twisted cord 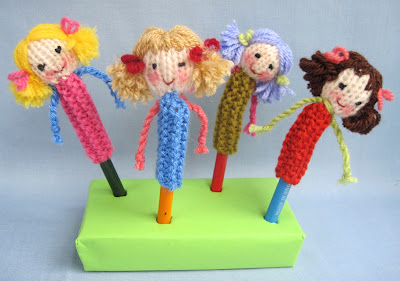 The following morning the dolls got a huge surprise when they found their little pencil people waiting for them. 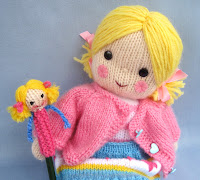 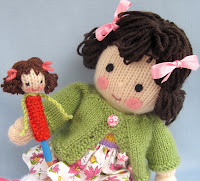 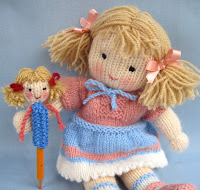 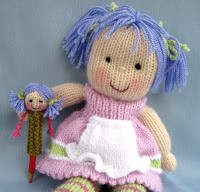 Now there will be no mistaking which pencil belongs to which doll as the little pencil people look a lot like their owners wouldn't you say?

If you'd like to make a Pencil Doll you'll need small amounts of double knitting yarn (light worsted in the US and 8 ply in Australia). You'll also need a pair of 3.25mm needles (US size 3)
Body - cast on 12 stitches. Knit 10 rows  in plain garter stitch. Cast off.
Head - cast on 12 stitches, Knit 10 rows in stocking stitch (alternate a knit row with a purl row). Don't cast off. Cut the yarn leaving a 15cm (6in) tail and using a tapestry needle take the 12 stitches from the needle onto the tail and gather the knitting. This will be the top of the head. Use the text above for instructions about making up.

This pattern for Pencil Dolls and several other free patterns can be found in 'Posy's Pattern Patch' in my blog sidebar.

Meanwhile if you'd like to make any of the dollies featured in this post you'll find patterns for them in my Etsy shop and my Dollytime (UK) shop.
Labels: At home, Dolls, knitting
Newer Post Older Post Home