The tale of Bunnykins china

In Wednesday's post I showed you 3 balls of yarn and a Bunnikins mug and asked if you could guess what I was planning. Sadly I have to disappoint those of you who thought I might be pregnant or expecting a new grandchild, neither is correct I'm afraid. The answer is a lot less exciting... another knitting pattern! Whenever I see Royal Doulton's Bunnykins china I'm immediately transported back to the days of my early childhood. The top two dishes belonged to my brothers but the bowl and plate at the bottom were both mine. As a tot I ate my porridge every day from the bowl and golden syrup sandwiches from the plate. For me it is a perfect example of what nursery china should look like, simple, sturdy, colourful and fun. I'm not a lover of the action scenes depicting modern animations that decorate some of today's nursery ware. Little people don't need excitement when they are eating. Bunnykins fun comes from the anticipation of finding those beautifully detailed scenes beneath the food when you have been 'very good' and cleaned your plate. And what little conversation pieces they are. 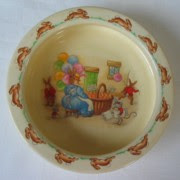 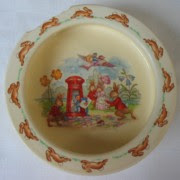 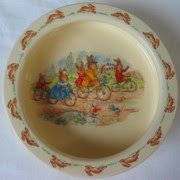 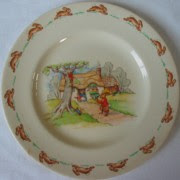 During all these years of admiration for Bunnykins china I have never once considered its history, until now that is, and the story behind its existence makes quite a touching little tale. In the early 1930s Mr Cuthbert Bailey was the general manager of Royal Doulton's Burslem pottery in Stoke-on-Trent. His young daughter Barbara had become a nun many miles away in Sussex and he missed her very much. His visits were infrequent and strictly controlled by the convent and he saw very little of her. During one of his visits however he asked her a favour. Barbara had always shown a talent for drawing and so he asked her to try and design something that might be suitable for a new line in the nursery china that Royal Doulton was planning. As she had a great love for both children and animals she had no hesitation in creating families of little rabbits enjoying the everyday life she had known as a child. Families cooking, picnicking, fishing, dancing and even a father rabbit bespectacled and pipe-smoking based on her own father. Although the Reverend Mother of the convent was unimpressed, the Bunnykins range was introduced by Royal Doulton in 1934 and was an instant success. Reverend Mother continued to be discouraging about the Doulton venture and demanded that Sister Barbara work at it in secret. And so she drew and painted each little scene very late at night, by candlelight, alone in her cell. 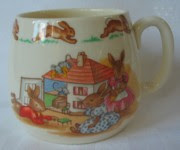 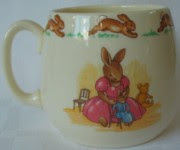 Working quietly and alone Sister Barbara provided all the Bunnykins designs until the Second World War (66 in total). Since then designs have been produced by a succession of other artists faithful to her original style. Bunnykins china is still being made to this day; the only Royal Doulton range to have endured so long. Sister Mary Barbara Bailey died at the convent in 2003 at the age of 92. Her obituary, printed at the time in The Independent newspaper, can be seen here. 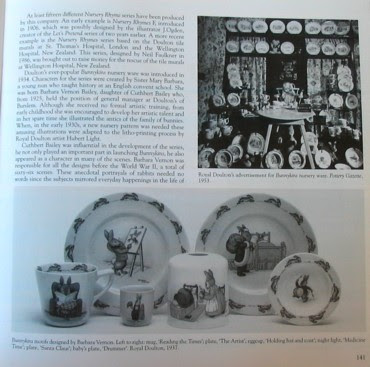 Above is a page from 'The History of Children's China - Part II'. Bunnykins ware is featured on page 141 along with an advertisement for the range dating from 1953. 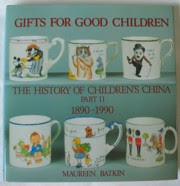 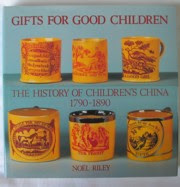 If you collect, or are interested in children's vintage china then both the above books are an excellent source of information and photographs (mainly black and white).
On the right - Gifts for Good Children, the History of Children's China 1790 -1890 by Noel Riley and on the left The History of Children's China, Part II 1890 - 1990 by Maureen Batkin.
Run rabbit, runI love the little rabbits that run endlessly round the rim of Bunnikins china so have produced my own knitted version (below). I have embroidered little pink daisies between the bunnies in the top row. Small blades of green grass in straight stitch would also be effective. 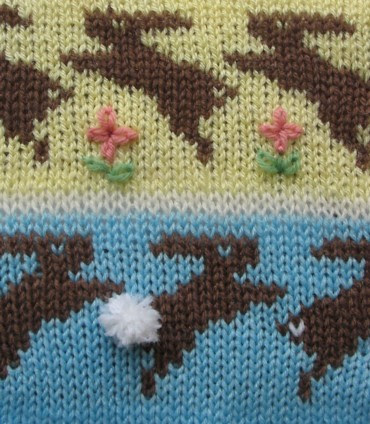 Making little white fluffy tails and stitching one onto each rabbit is a bit fiddly but the finished effect is worth the effort don't you think? 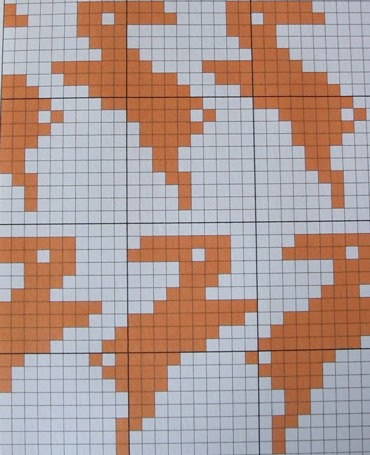 This chart can be used for knitting or cross stitch embroidery.
If you are planning a gift for a tiny tot you might consider giving a piece of Bunnikins china together with a little knitted hat, jacket or blanket decorated with a row of running rabbits.

Little Bo-peep will travel to.....
I want to thank everyone who entered my little competition last week. I was very touched by so many nice comments and really do wish you could all be winners. Bo-Peep and her rascally sheep have been growing more and more excited in anticipation of travelling to a new home. 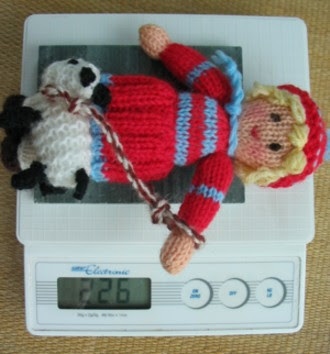 It is now time to reveal the name of the winner. The weight of Bo-peep and her sheep together with the piece of Lakeland stone is 226 g (8 oz).
Here are the entries which can be seen in the comment section of my 15th October post.
Martha 217 g, Andrea 204 g, Paula 270 g, Maria 227 g, Sabine 194 g, Mumintroll 290 g, Suzanne 218 g, Robyn 180 g.
Well done Maria, your guess was only 1 g more than the correct answer. Little Bo-peep is ready and waiting to travel to Spain. How exciting!
Labels: books, collecting, knitting
Newer Post Older Post Home