September, and a new school year is just beginning. Of course it's many years since I was in the classroom but there's something about the golden glow of shortening September days that gives me a renewed energy and a need to start something new. . . . . So this year I decided we'd decorate our bedroom as it's needed some TLC for quite a while. 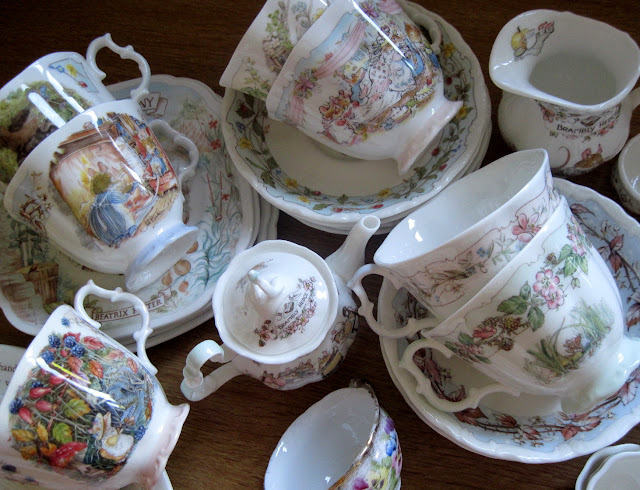 The first job was to empty everything from the bedroom shelves. Pieces of china were washed and then put into places of safety until the decorating work is over. The Brambly Hedge looks rather nice on the downstairs dresser so I might leave it there for a while.
Other precious pieces, like this dolls Victorian tea set, have been placed into my glass cabinet along with a few other treasures. 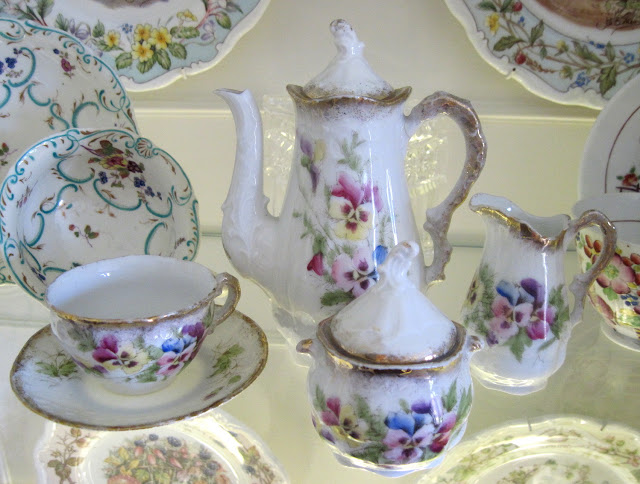 Next the curtains came down and after washing they looked as good as new. I'm happy about this as I've always liked them but I suppose it would have been nice to have an excuse to buy new ones so if they'd emerged from the machine in a dilapidated state I wouldn't have minded too much! 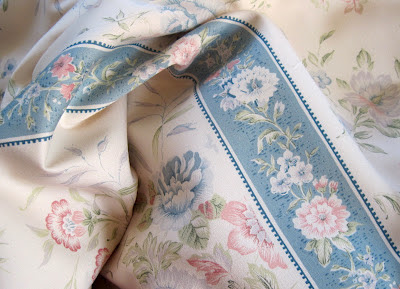 Hubby and I have always shared decorating jobs. Thankfully he's happy to strip off old wallpaper (which I hate doing) and paint ceilings and walls. I do all the remaining paintwork and then hang new wallpaper. Whilst he was taking off the old paper I was able to spent time considering new colour options. 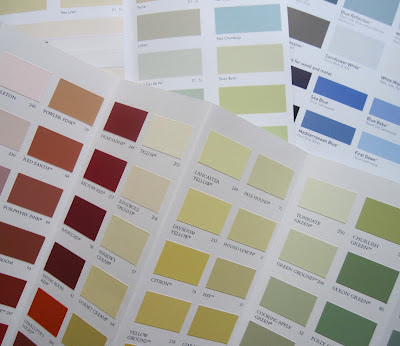 Previously I'd hung wallpaper on all four walls but this time I plan to do just one feature wall behind the bed and then get hubby to paint the remaining walls. We used this jade white in the cloakroom recently and it matches the stripes on the bedroom curtains perfectly so it might be the right choice. I've painted a small patch on the wall so that I can make a decision. 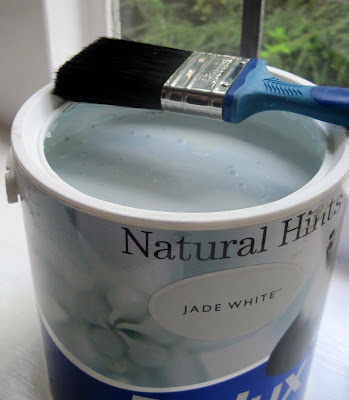 With a few days of much needed sunshine the bedroom windows have been wide open and yesterday this pretty little butterfly flew in for a look around. It wasn't one I was familiar with so before setting it free I took a picture for identification purposes. 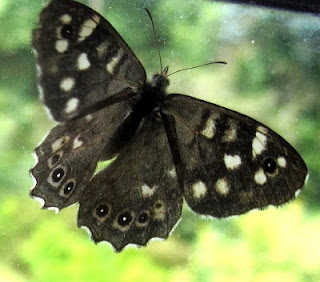 Out with my trusty 'Reader's Digest Guide to British Butterflies' and I was soon able to identify the 'Speckled Wood'. Looking at the map of Britain on the page it was obviously not found anywhere near our area when the book was published several years ago but during the intervening years has presumably colonised further north. I suppose the experts would say the butterflies' gradual move north is due to 'climate change' (it's the usual reason given). Anyway, the Speckled Wood butterfly is very welcome in our garden so I'm not complaining! 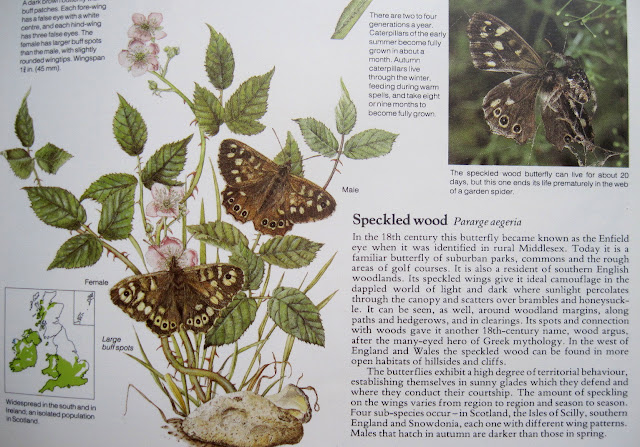 If you are hoping for a new knitting pattern to appear in my Dollytime shop soon then you'll be happy to hear I'm finding a bit of time to knit during the cooler September evenings. I'm never 100% certain that items will be good enough for patterns until they are complete so I won't give you any clues about what I'm making until I've finished. I must admit it doesn't look very exciting at the moment does it, but hopefully the result will be quick and easy to make and a useful 'stash buster' (dolly related of course!) 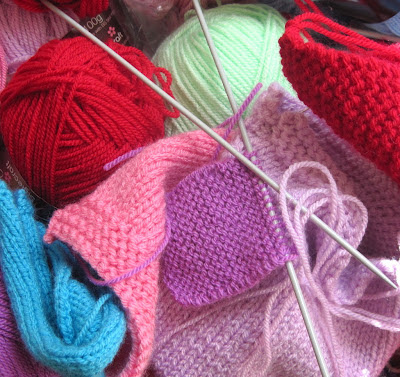 Thinking of dollies! I made another item from my Liberty Lawn at the end of last week. A zipped pencil case with another little 'Jolly Dolly' on the front. 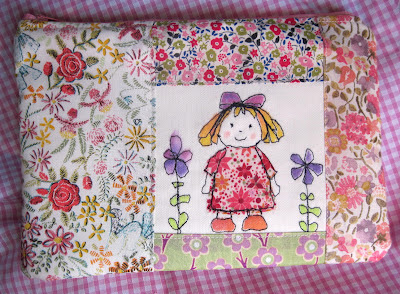 With the start of the new school term fast approaching I asked Lucy Lavender and Kate to sharpen some pencils and pop them into the new pencil case. 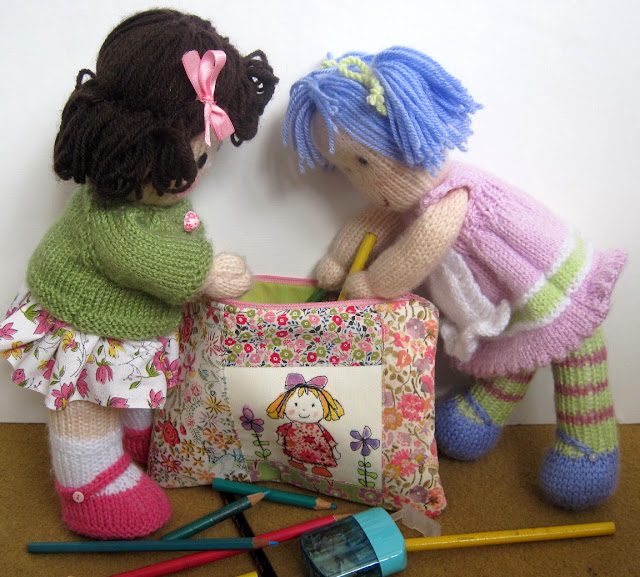 Everything was going well until . . . . . . . . a head with long ears suddenly popped out and surprised them both. One of the rascally bunny boys had obviously fancied setting up home for a while in the pencil case. Usually this could have resulted in playroom antics and eventual chaos but not this time. . . . . . 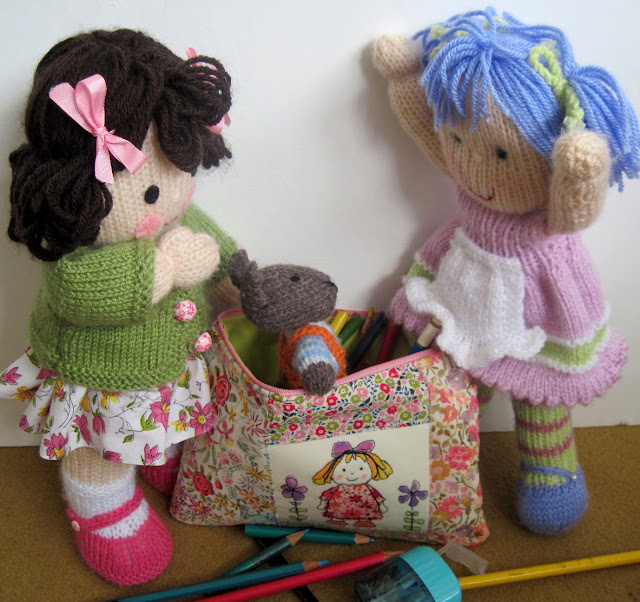 . . . . . . the little fellow behaved like a very sensible bunny and, without any prompting from the girls, began passing pencils when they were required. 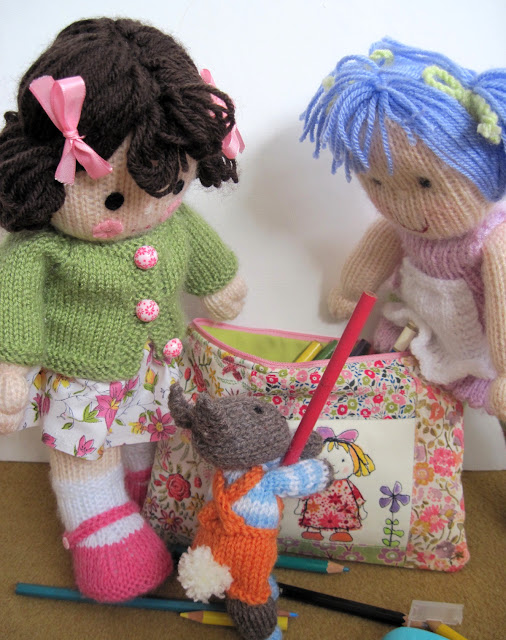 I can't believe this much improved bunny behaviour will continue for very long but for now all is peace and tranquillity in the playroom!
Labels: At home, Bunnies, Dolls, knitting, Sewing and Other Crafts
Newer Posts Older Posts Home
Subscribe to: Posts (Atom)